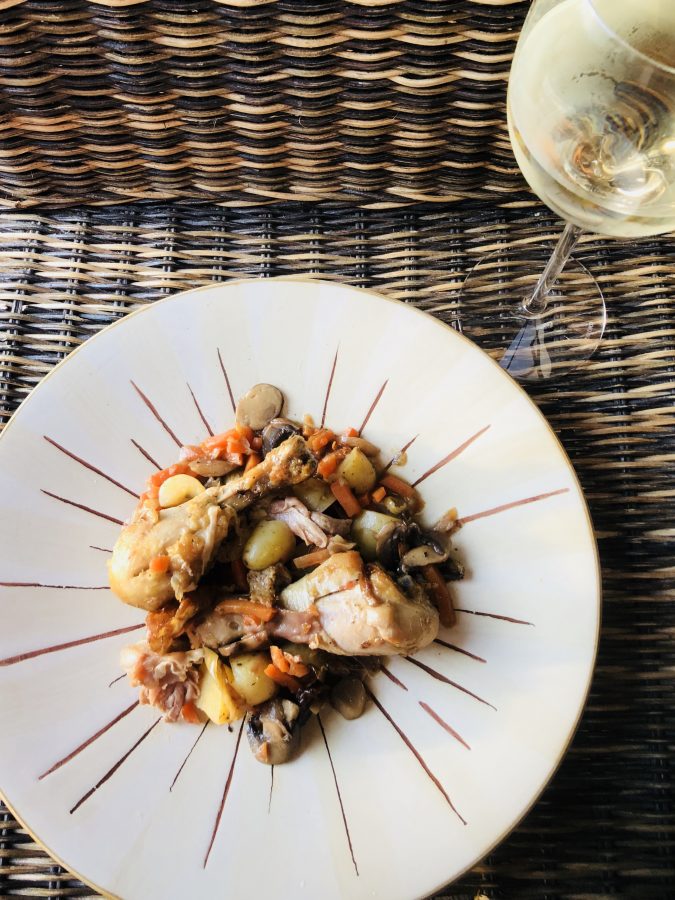 The best part about wintertime is the food – just how the world around us has drawn hearthside, slowed down, and warms up with blankets and fuzzy socks – my favorite foods slowly cook in the oven for hours and warms my family’s insides with each bite. (My favorite recipes also make enough to freeze the leftovers, which is handy for those really lazy winter days when I just can’t be bothered to do more than defrost.) My kids lovingly titled this one White Wine Coq au Vinny, after their Dad. In Belgian and Holland, most grocery stores sell pre-sliced carrots and onions for Hutspot (a traditional Dutch stew) which makes this dish really easy to prepare.

Coat the bottom of a large Dutch oven with a thin film of olive oil and set over medium-high heat. When oil dances, add chicken and cook without crowding (you may need to work in batches). Cook until skin is golden brown and chicken lifts easily from the pan when lifted with tongs – about five minutes on each side. Transfer browned chicken to a plate.

While chicken is cooking, slice bacon into small pieces. When last batch of chicken has been removed, add bacon to the pan and cook. If bacon is greasy (ahem, American vs. European), pour off all but 2 tablespoons of fat. Add onions and carrots and cook, stirring often, until vegetables are softened, about three minutes. Add mushrooms and stir in about ½ cup of broth and thyme, stirring to release the browned bits. Let come to a boil then reduce heat, cover, and simmer until mushrooms have booked down by half, about seven minutes.

Pour in the cup of wine and let come to a boil. Stir in the potatoes and season with salt and pepper. Tuck chicken legs into pan in 1 layer. Pour in enough remaining broth the come halfway up the sides of the chicken. Bring to a boil then transfer pan, uncovered, to the oven and cook until potatoes are tender, and chicken is opaque at the bone. (About 45 – 55 minutes). Baste the chicken a few times with pan juices. Serve on its own or with Garden Noodles! 🙂