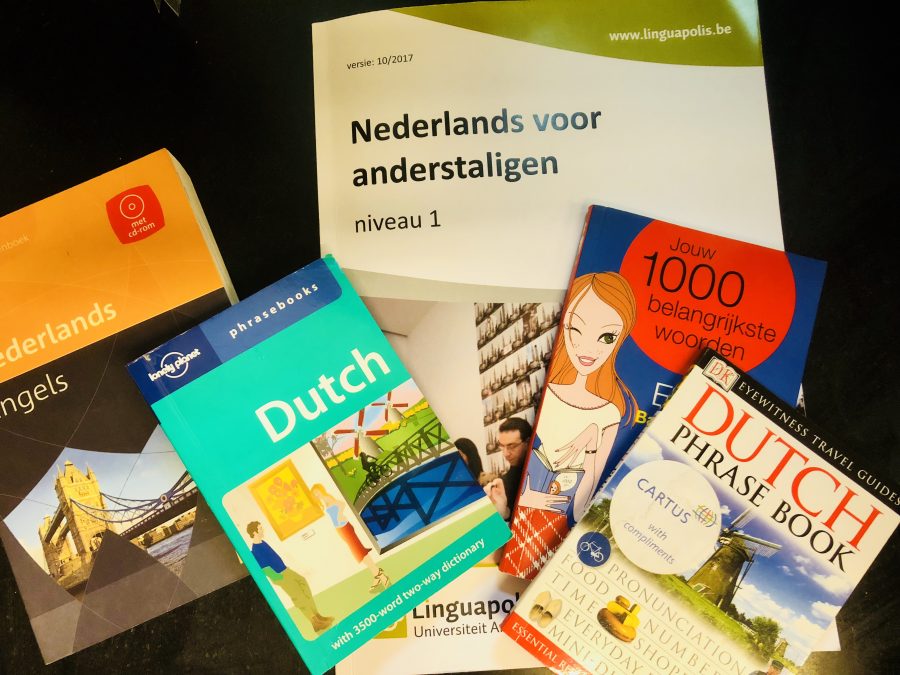 “Waar is de vuilnisbak?” the little seven-year-old girl looks at me with dark brown eyes. Her head is cocked. A mischievous smile plays on her round face. She is taunting, entertained, and curious. I bite my lip. Where is the what?

“Ah, sorry,” I say in my best Dutch accent – flash a toothy smile in her direction. “Can you say that again?”

She blinks. “Waar is de vuilnisbak?” she repeats. Her eyes tease me again. Her head leans another inch to the left, so it’s now horizontal to the floor. She’s so cute and yet. . . She knows I have no clue what she’s saying.

“Sweetheart?” I wave for my daughter to accompany me and her best friend in the foyer of our home. She skips from the living room to my aid.

I lean down towards my daughter, my buddy, my translator. “What did she say?” I bite my lip again. My palms are sweating.

My daughter nods and smiles, “What zie je?” she says to her friend.

My daughter’s hands fly to her mouth to suppress her own laugh.

“Mama!” she says, putting her hands out to the side in disbelief, her jaw dropping. “She wants to know where the trashcan is!” and they both laugh at the silly little joke. I laugh too. But it’s kinda fake. . . They run off, hand in hand towards the sunset, leaving ignorant Mama in the dust, a single tear trickling down her porcelain-like cheek. Not really. But. Well. Anyway.

So. It was at my daughter’s Christmas Tea when I decided it’s time. Trashcan? How can I not know what trashcan is in Dutch? Hell, I know it in Spanish – basura! Fine. Fine. Fine. Nothing like a couple of seven-year-old making you feel dumb to prompt you into finally taking Dutch lessons.

During the next few weeks, I researched options, asked a few friends, and started looking at the Dutch course offered by the University of Antwerp. I’d heard of many options – intense four days a week during the day (um, no. . . let’s not exaggerate) three days a week during the day, (uh. . . not possible with my son’s schedule of half-day preschool) and then I found a one evening a week course. (Ah! Perfect! Totally manageable!) And I signed up before Christmas. The class started at the end of February.

I’d heard that Dutch courses are intense – they go quick and expect a lot out of you. Afraid of failure or looking dumb (again), I open that DuoLingo app I had downloaded on my phone a year ago. I don’t want to get behind. I am determined. This year. This is the year.

So, everyday since January 1st, I’ve been spending 30 minutes a day on DuoLingo. (Despite the flu and darkness, I still pushed through.)  I shrugged through the first few lessons – jongen, meisje, neushoorn. . .  yeah, yeah. But then, I kept going. After a few weeks, I started to feel the excitement of a young child just learning to read. I drove through the city and my eyes alighted with recognition and confidence. Words I always kinda knew – I could now say with assurance – haven means port, blijfdorp – happy village! (After 59 days, however, I will vouch that I have not gotten to trashcan.)

End of February approaches. I get emails from the University, preparing me for the course – in Dutch with English translations below. I like class. I do. But it’s been a long time since I’ve been in like. . . college. And the last class I took was a writing course a couple summers ago. I pack my bag with a new notebook, pens, and instructions on my phone about the building and room number, but yet – I have the first day of school jitters as if I was going off to kindergarten.

“You’ll be fine,” my husband says to me. I always get a bit anxious when I do something new. You’d think I’d be over it by now. Seriously.

I drive and park at the first parking lot I see by the University. I’m looking for building R. I step through the lot, and frown at the sign on the closest building “Gebouw A”.  I hop over to the large campus map on the corner, and squint. I get back in the car and keep going. The University is huge surrounded by trees and parking lots. I wind through the road and find a closer lot. I walk one way then that way in search of Building R. I press through the doors and I hear that warm blanket. . . English. Two women at a desk are directing everyone up the flight of stairs. I stand in line behind other students, right on time.

I enter a huge room – there must be a hundred students in here. I look for a seat. There’s a buzz in the air – an excited, nervous energy. I’m not alone in my kindergarten jitters. Everyone is smiling and wide-eyed. One of the instructors is roaming around the room, pointing. “Where kom je?” she keeps repeating. She gathers answers and goes back to the chalkboard to write them down. I know what she’s saying. She wants a country. But United States of America is not in my Dutch vocabulary.

I see her coming. She’s pointing. And pointing. “Ik komt uit China” a guy says. “Ik komt uit Spanje. . . . Ik komt uit Italie” Cheaters. She gets closer. She points. What country am I from? “Ik komt uit Texas,”  I say smiling. Her eyebrow raises, but she’s nice about it. Then starts pointing to the board, her chalk in her hand. Blah, blah, blah De Verenigde Staten van de Amerika she rambles and I write it down. I decide to change my nationality.

After the Ik komt sentence, we are told how to introduce ourselves. We must practice. I introduce myself to the guy sitting next to me. “Ik ben Celeste,” I smile at him. He returns the smile.

“I didn’t expect a class this large,” he says and I agree. The buzz swells like a Mavericks game. There’s an intensity in the room. Everyone is there for a different reason – kids, work, pressure from a Belgian girlfriend, etc. But it’s like being in a warm bath too – I’m in a room of 100 people from around the world that don’t speak Dutch. I take a deep breath and there’s a centering that takes place. Within a few minutes, the instructor explains that we will be split into four groups. To listen for our name. We will go with our teacher. Visions of elementary school gym flash through my memory. Who will pick me?

My name is called and I follow my new classmates out the door to our classroom. The woman at the front of the room had already explained that learning a language is similar to riding a bike. Up a hill. But it’s not a straight hill – it’s going to have valleys and tightropes and rodents of unusual size and all these things trying to deter you. I think of expat life. My children. My writing. Is there anything in life that’s a straight line? Yeah. . . I don’t think so.

But, she also explained that the first few days are fun and exciting. You’re motivated and encouraged. This is the year. Our teacher rolls in and speaks Dutch for three hours straight. Thank God for DuoLingo. I start getting a headache about halfway through – and I wish I was lying about that. From the noise? From thinking too hard? I grab my water bottle. Surely, I’m just a little dehydrated.

I’m keeping up pretty well until she looks me in the eye.

“Wie ben jij?” she asks. Her face is sunshine.

You got this. “Ik ben Celeste” I say. Reflecting her glowing energy.

I blink. My head is pounding. God, what the hell is she saying? I spaced out for like two minutes! Herhalen?  I’ve never heard this word.

My palms are sweating.

“Ik ben Celeste,” I say. I’m starting to question my home country and my own name now.

“I’m sorry. . .” my Texas accent is strong tonight. I can hear it in the back of my throat. It’s like there’s a war inside my vocal chords. “I was keepin’ up with ya just fine, but now ya lost me. . .” I blink at myself. What is wrong with me?? I sound like my Dad!

She smiles and switches to English – the handful of English words she says during the evening are like pieces of candy. We gobble them up. Pens fly across pages. “Herhalen. Is repeat.” The irony is funny.

The lesson continues in Dutch. I blink and lean forward in my seat. There are trains of words spewing from this woman’s mouth. I’m like that guy with the suitcase running down the platform – wait, wait! I’ve tried so hard! Don’t leave me behind already. The dude sitting next to me busts out his laptop after two hours and starts google-translating everything the teacher is saying. Goed idee.

The evening concludes. Everyone is exhausted and done. We pack our bags and head out the door. Again, getting confused by the entrances and exits – just trying to find out way out of the building, out of the parking lot, towards our familiar homes in this unfamiliar country. But yet, I feel a confidence gained from that huge room of curious people. I’m not the only one navigating this strange life with pressure and encouragement from kids, colleagues, or significant others. Every journey begins with a step. It’s going to have a lot of valleys and tightropes on this straat we’re headed down – but we can use that vuilnisbak to throw away anything we don’t need and keep going.