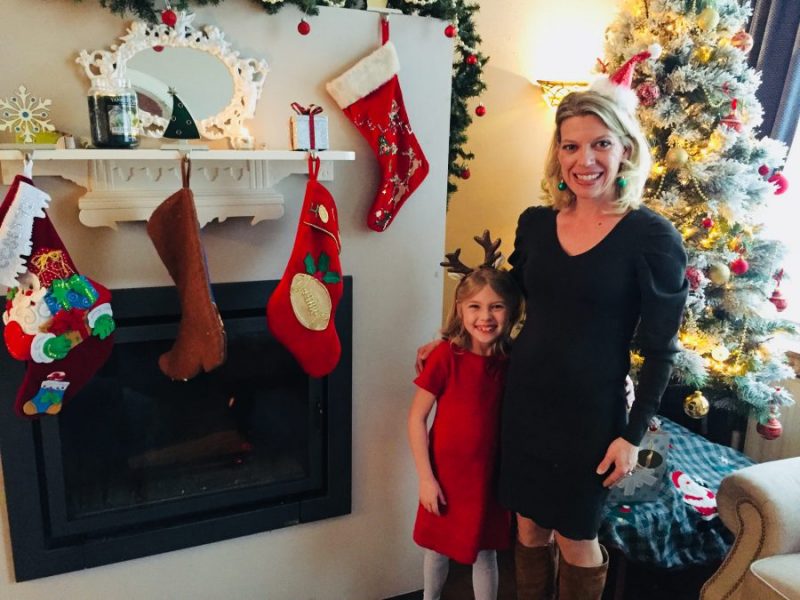 The idea began with me laughing and shaking my head at Facebook posts. My husband grew up in Louisiana, and his fraternity brothers all married beautiful southern-born women. While Texas has its own way of doing things, I can admit it’s probably a little more rugged and less refined than its southern sisters. With firmly planted French roots, New Orleans has a unique and sophisticated manner of decorating, speaking, and hosting. Back in September I swear, or maybe it was October, I saw Facebook posts requesting recommendations for mother-daughter Christmas teas in Baton Rouge and New Orleans. I smirked. I did. “Really?” I told my husband, “Is this a thing that needs to be researched and booked this far in advance? I mean, sounds like a nice idea and all. . . but seriously?” he just shrugged. Christmas teas were not in his realm of expertise.

Well. I’m glad those Louisiana Southern Belles were on top of things months ago because it allowed my mind to simmer. As I gazed at my Grandmother’s china and teapots tucked into my cabinets, an idea formed. Why couldn’t I bring this tradition to Belgium? My daughter had been bugging me for months to have her friends over. A request I denied because well, three kids (including a monkey-like three year-old) is already enough, and I just didn’t know her classmates’ parents that well or how they’d feel about dropping their daughters off with a lady that could barely speak to them. “I’ll be your google translate,” my daughter said to me. But I still hesitated. I needed to lay some groundwork. Show these parents ‘my thing’. The best way to bust the ice is to host a party, Belle in Belgium style.

It’s challenging to host an American party in Belgium, but by golly, I’m learning. Without Hobby Lobby or Target or Party City, I’m figuring things out. Cosette and I found cute little invitations at AVA which she hand wrote herself (in Flemish) and I included a letter explaining the popularity of Christmas teas in the Southern cities such as Dallas, New Orleans, and Atlanta. I wrote about our desire to share this tradition with her friends at school. I suggested each girl to bring a 10 euro wrapped gift, and explained that each girl would go home with one. I requested the parents to email me or text their RSVP. Then I google translated the whole thing and printed it in both languages. Cosette delivered the invitations to all the girls in her class and a few of the older girls whose moms I’ve met throughout the year. By mid-November, the ball was rolling.

After Thanksgiving, the next step was to decorate the house. Last year, I barely wanted to put up a Christmas tree. I was homesick for Texas and didn’t have a friend in the entire country to invite over, anyway. Christmas was just the five of us and while three small children makes Christmas festive no matter what, I was just. . . not comfortable or settled in my new home, yet. Truth be told, my husband did most of the Christmas decorating while I focused on keeping the day-to-day going. We were still figuring out which days to pack swim clothes for school and how to sign up for the Christmas play, in addition to the much bigger challenges of trying to get our Belgian residence permits and driver’s licenses. This year, with all that frustrating admin out of the way (not to mention countless friends and support I’ve made and gained over the past year) I led the Christmas Decorating 2017 campaign. During my visit to Texas last month, my mom gave me my childhood stocking she stitched for me decades ago, as well as the ones she’s handmade for my husband and daughter. I unpacked them and proudly displayed them on my mantle. By early December, we hung up lights on our windows and flipped them on (much to the dismay of my neighbors – In Belgium most people don’t decorate for Christmas until after Sinterklaas leaves to go back to Spain. . . but that’s another story). We ordered Yankee Candles – The Perfect Tree, Crackling Wood Fire, and Christmas Garland – from Amazon.de. I bought two poinsettias and a mini christmas tree from Albert Heijn for a grand total of seven euros. As my husband and I sat back that weekend enjoying the wood burning fire and sipping a glass of red wine, we were pleased with the transformation of the house. Christmas spirit was in full swing.

The next week, Cosette and I took a girls’ trip into the city to prepare. We needed outfits. Or at least accessories. The tram whipped us into town on Wednesday evening and we stepped out of the Antwerp Centraal train station with excitement and purpose. Strings of sparkling lights spanned the largest shopping street in the city, the Mier. All the windows were lit and festive. We walked on and my eyebrows started to furrow. The shoppers had thinned. I saw shop staff hauling in the street signs inside, sweeping floors, and throwing down shutters. We walked on and my heart pounded with dread. I glanced at the time on my phone. Twisted my lips. Of course, Claire’s, the American staple store for all accessories gaudy and cheap closed at six. (Much to my American-consumer-heart’s dismay. It’s December, for goodness sake!) But H&M came to our rescue. Their doors wide with welcome, at least until 7:00 p.m. We rummaged the store, finding festive headbands and christmas ball earrings (“Yes, Mama – you need BOTH”). A cute little red dress and sparkly Dorothy-like shoes were added to the bag. We exited the store pleased with our good fortune and headed to Wagamama for dinner. A perfect girls’ evening.

The last hurdle was to decide and prepare the menu. Being my first Christmas tea party I wanted to include some of my family’s favorite Christmas recipes, along with tea party goodies, and party staples. As usual, it was an overzealous menu, but I was excited. I prepared the shopping list and headed to my favorite Albert Heijn the next day.

Saturday, I was in full party-prep mode. I booted up my computer in the kitchen and had Miracle on 34th Street streaming as I measured, mixed, and baked new and old recipes. Just as I had helped my mother bake snowballs when I was young, Cosette joined me in rolling and dipping the little goodies in powdered sugar. I diced fruit for the salad, pulled Terrific Thyme crackers out of the oven, tested my homemade scones with the Lemon Curd I bought at the store. I sliced cucumbers, eyed my first batch of sunshine lemon cookies with suspicion (that’s ¼ teaspoon baking soda, not 1 teaspoon), and dumped gingerbread decorating candies in bowls. I pulled my grandmother’s treasures from the china cabinet – tea cups, crystal plates, and china tea pots – rinsing and drying each one with care. My husband and I rearranged furniture, whipped out tablecloths, and set centerpieces on each table. We moved our extra jackets to the upstairs closets to make room for guests’ coats and scarves on our coat rack. By the end of the day, I had everything prepared except for the tea sandwiches. I collapsed on the couch.

Sunday morning we awoke to snowflakes drifting from the grey Antwerp skies. “It’s snowing, Mama!!!!” all three of my children screamed once the sun rose high enough to see the backyard clearly. “I’m dreaming of a White Christmas Tea Party!” my Belgian friends texted. It was the perfect setting for the day.

I prepared the tea sandwiches while Christmas music sang from the corner of the kitchen. “What time does the party start, Mama?” Cosette asked about 163 times that day.

The scene was set – the snow was thick outside, the fire roaring, the activities organized. The doorbell rang. Showtime.

Our friends entered in a flurry of activity. Cheeks were kissed, gifts for the exchange were tucked under the tree, and little girls jumped up and down giggling and hugging in the foyer. I had bought a tea set coloring activity at a cute gift shop in Austin last month, and the girls started decorating the paper tea pots and cups upon arrival.

The moms smiled and gawked at the display of food and my collection of tea cups. “It looks lovely! How long have you been cooking?” they asked and I just smiled. After coloring, we filled our plates and cups. I explained the different teas – one was a Christmas tea I purchased from Holland & Barrett, and the other one I made myself – an old family Spice Tea recipe my mom always makes. I pointed to the food on the table and translated most everything for her friends. (Food is the one thing I DO know in Dutch. Cosette insisted on correcting my pronunciations, as usual, though.)

Although many of the foods were unlike what they’d find in Belgium, everyone nodded their approval. We filled our tea cups again. Plates were emptied. The chatter around the room mixed between Flemish and English from the mothers. I told Cosette to have everyone gather round the tree for the gift exchange and she relayed the message. Five little girls giggled as they pulled numbers from a jar. “Number one chooses from the pile first,” I explained. Cosette translated. They each unwrapped their gifts – laughing and bouncing on the sofa.

As we headed back to the table, my 6-year old son started peeking from around the corner. The original plan of a Daddy-sons day had fallen short with the plethora of snow and subsequent icy roads that afternoon. Being holed up in his bedroom upstairs for an hour was enough. I whispered into his ear, “You’ve been so sweet, letting Cosette have her party with her friends. Would you like to join us for the final activity?” and he nodded. As he shyly entered the room, the girls greeted him and pulled out a chair for him to join them. Their Belgian school breaks loose all age groups at the same time for recess. It’s total madness and I fear for my safety and sanity (much less my kids’) anytime I’m caught in the storm on the concrete jungle between the buildings. The upside of 200 kids all running around like a swarm of fire ants is that they have the opportunity to mix and mingle with all the kids in the school. Despite the fact that most everyone knows my three “English-speaking kids”, but also because of the buddy systems and the daily interaction on the playground, first and second graders hanging with sixth graders didn’t even cause a blink of an eye at this party. They all sat together, sharing and encouraging each other’s decorative expression. Even the youngest enjoyed squeezing the entire tube of frosting onto his cookie, “toothpaste!” he exclaimed. Makes sense. What kid hasn’t wanted to squirt colgate all over the bathroom just to empty the package? It was a happy moment for him.

The party concluded by snapping lots of photos, sipping more tea, and stealing cookies from the table once more. As the girls ran upstairs to see Cosette’s room, the moms turned to me, “We know the party said from 3 – 5, but do you mind if we stay and hang out a bit more?” I cocked my head and blinked. The super-planned American party meets the relaxed Europeans. I nodded.

“Please, do. The entertainment is done, let’s hang out a bit longer,” I smiled. I sat. And these lovely ladies indulged me with English conversation in my Belgian home, while sipping on Grandma’s tea cups. It was a perfect party, a perfect day, and I was so proud to share our Southern custom with them. And I got a few new Belgian Facebook friends out of it, too.