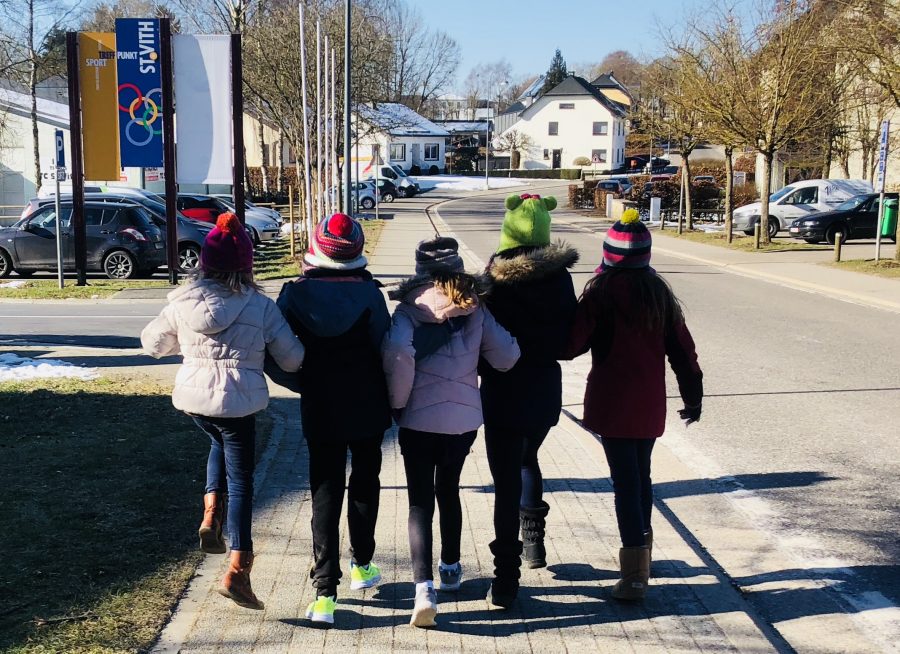 The metal gate glides open and the guard waves me through. I hand him my passport and he smiles. Asks me to pull my car off to the side. I turn the engine off and step into the cold, walk the short distance to the guard’s booth. Another mom traverses the second barrier, hands the French-speaking guard her ID. The two frozen men in the tiny booth joke they want chocolate in return for the favor. I offer Girl Scout cookies instead. There’s document signing, ID checking, photo-taking, etc. etc. etc. After giving them a blood sample and a promise to sacrifice my first-born if I forget to turn off the lights, I park and unload my boxes. I carry art supplies, snacks, and my Brownie leader’s guide into the Brussels American School. My daughter skipping at my side up the steps.

The first request my daughter had upon moving to Belgium was to be in an American Girl Scout troop. During the year and a half we were back in Texas, she attended kindergarten and we signed her up for the Daisy Girl Scout troop at her school. I remember emailing the woman who had volunteered to be the leader. Hi, if you need any help with anything – cookie mom, whatever, I used to be a Girl Scout myself. Just let me know.

She wrote back immediately. Fantastic. How about you be co-leader?

And I had to laugh. With three kids of her own and her make-it-happen attitude, Jennifer quickly became my new best friend.

We had a fabulous time with our Girl Scout friends in Texas. Using our bakfiets we brought back from the Netherlands, the whole family sold Girl Scout cookies door-to-door in the same neighborhood I sold cookies in when I was a scout. My 6-year-old daughter would ring each doorbell, recite her sales pitch, and my 5-year-old son would shout “FOUR DOLLARS A BOX” waving four tiny fingers for emphasis. We sold almost 250 boxes that way. I talked to people in my neighborhood, telling them I lived there as a child. My Dad built houses in the neighborhood, some of the houses in which we visited, and many people remembered his name.

We attended the Plano ballet theatre, had an end-of-year fajita party with the girls and the parents, and earned many petals – Courageous and Strong, Be A Sister to Every Girl Scout, Use Resources Wisely, and more.

With my daughter’s request to continue her Girl Scout journey my husband started emailing the USAGSO before we left the States. I knew there were Girl Scout organizations overseas – I had seen the Den Haag troops at the Thanksgiving Ceremony in Leiden presenting the flag, but we weren’t sure if there was a troop in Antwerp. There wasn’t. We signed up for a troop out of Brussels. The Brussels American School (BAS).

As an expat in the Netherlands – I had friends that worked at the University of Leiden, the European Space Agency in the Netherlands, many different companies, but I had never known anyone in the military until we moved to Belgium.

The BAS troop spans from kindergartners (Daisies) to seniors in high school (Senior Ambassadors). At our first all-troop investiture ceremony I started talking to a few of the of the older girls.

“So? Where are you guys from?” the answer was often Virginia.

“Oh really? So, um, where do your parents work?” the answer was often NATO or the Embassy.

After her second year of Daisies – one in Texas and one in Belgium – my daughter bridged to Brownies. With no other parent volunteering, I raised my hand. “I’ll be the Brownie leader.”

So, although my daughter is going to a local Belgian school and we live in Antwerp, we head down to Brussels to hang with our American friends at their heavily-guarded American school. They have Cheetos and Gatorade at the concession stands during school events.

After hauling my boxes up the stairs, we enter into the lobby of BAS and I flip on the lights. Unpack. The second and third grade girls pull out chairs and sit down. Ready to go. Sunlight streams through the windows while the cold wind whips around the building. There’s a blue US postal mail box outside. Signs taped to the windows are in English. The building even smells like my high school.

We sit around the table. “Did everyone bring their letters?” I ask. And four pairs of eyes twinkle back at me. Their assignment over the past few weeks was to contact a family member and explore their family heritage. Thus, the following:

i am doing a project for girl scouts. for my family story badge. so that is why i am sending you a email.
i would love to hear about when you were a girl scout . my meeting is tomorrow so hope to hear from you soon.

Yes. I’m the Girl Scout leader. And my daughter does things last-minute. She asks me why all the other girls have their badges on their vests already. Because your Mama is busy planning meetings. But you’re right. I’ll put them on before next meeting. Promise.

My mom was the leader for a few years when I was in scouts and she loved to take us camping. We all loved it too. As you see on my sash, we had the bowling badge, (we made this badge up & I embroidered that bowling pin and ball on the badge). We thought that was pretty cool.
We also sold Girl Scout cookies. We would take orders in the neighborhood going door to door, going many blocks, and then I delivered them in a red wagon when the cookies came in. They were 50 cents a box. I sent a picture of my cookie order form. There were only 5 different kinds of cookies.

I love my mom’s response. I knew about the red wagon cookie delivery, but I had no idea that my Grandmother was a Girl Scout leader too. I’m carrying on the tradition, and I didn’t even realize it.

We go around the table – everyone sharing photos of their parents “with sheep haircuts” (Didn’t we all look like sheep in the 80s? Gotta love the perm. We were totally rad.), a Georgia family cookbook complete with laundry instructions (waurshboard is a real word, right?), and photos of family vacations. We laugh and smile. The other mom and I laugh harder than the girls, I’m sure. . .

The meeting continues, and we prepare for our World Thinking Day event. In 1926, the Girl Guides (from the UK) and Girl Scouts (from the US) decided there should be a special annual day to celebrate the international movement. They chose the birthday of Lord Baden-Powel, February 22nd, who is the founder of the Boy Scout movement. Since 1926, World Thinking Day is an international day of friendship. Our little troop in Brussels, Belgium is part of that international vision.

Typically, troops choose a country to represent – they may gather in a large gymnasium and have a booth and create posters, food, and little swaps signifying the country. This year, the BAS troops and the ISB (International School of Brussels) decided to capitalize on the theme “Impact”. Instead of choosing a country, we were tasked with creating a poster (or more) to represent a woman who had impacted the world.

I shrugged. A woman who impacted the world? Rosa Parks? Jane Goodall? Mother Teresa? I could ask the girls who they thought, but there wasn’t much time. Let’s pick someone cool. Someone that’s alive. Someone that they might have a chance of knowing.

“So girls, we have to choose a woman who has impacted the world. I think I have the perfect choice, Oprah Winfrey!” and I began to illustrate a shortened biography. What’s more fun than a billionaire t.v. celebrity who’s also a kick-butt awesome woman? They caught the vibe. They illustrated the poster with enthusiasm.

A few weeks later we’re with all the other troops in a lodge near the Belgium-German border. The girls are at the front of the room presenting Oprah, complete with a flat-screen t.v., microphone with Sesame Street characters, and actual Oprah book club books from my bookshelves.

“What makes Oprah so special?” a brown-haired brownie asks the other.

There is a silence as the audience awaits an answer. We all breathe, transmitting hope, “Oprah was positive and encouraging, when the other talk shows were not,” the mousy brown haired one responds. We exhale.

“And she opened a school for girls in South Africa!” another Brownie chimes in, and the audience nods.

Another one of my Brownies enters the TV screen, “These are the books Oprah bought for her book club. The Poisonwood Bible, Wild, and Cane River,” she adds.

The whole room is captivated. It’s so cute. I’m so inspired.

It’s the first overnight trip for all of us. The five of us have made our beds, brushed our teeth, and had a flashlight dance party in our room.  I read them stories from a book I found at the American Book Store in the Hague, inspired by the theme of Thinking Day. Bedtime Stories for Rebel Girls. Then each of them take turns reading a story themselves. I tuck them into their beds and kiss them all goodnight. I may not be their mama, but I can’t help it. It’s what I do. I listen for them to fall asleep.

The next day we awake. I’m drowsy from a fitful evening. One of my brownies woke up in the middle of the night to use the ladies down the hall and another one talked in her sleep. With each conversation she had, I jumped out of my bed in a panic, “Are you okay, is everything alright??” to be met with snores.

We go to breakfast – they fill their plates, grab their silverware, and I help them pour their milk. The five sets of eyes smile at me. We return our dishes to the kitchen.

“Food scraps here, silverware here, and put your plate here,” I instruct, and they nod.

We join the Daisies and the Brownies from ISB and head off to the playground in the snow. They play. They laugh.

“You know, besides all the journeys and the badges and the this and the that. . . do you know the point of all of this?”  The Brownies leader from ISB nods with affirmation, “Is that they get along.” I am encouraged.

We walk back to the bus and the girls link arms. The girls are from three different schools. They live in Antwerp and Brussels. Their heritage is Spanish-American, Dutch-American, French-American, and one girl joined our troop just days ago. But yet, they form a wall as they skip down the sidewalk together and put up a fierce fight to reserve the five seats in the back of the bus. At seven and eight years old they have an unwavering loyalty after just a few days that women chase their entire lives. It’s beautiful. Inspiring. Encouraging. I hope that the lessons they learn in these years in Girl Scouts – leadership, loyalty, friendship – carry with them in the future.