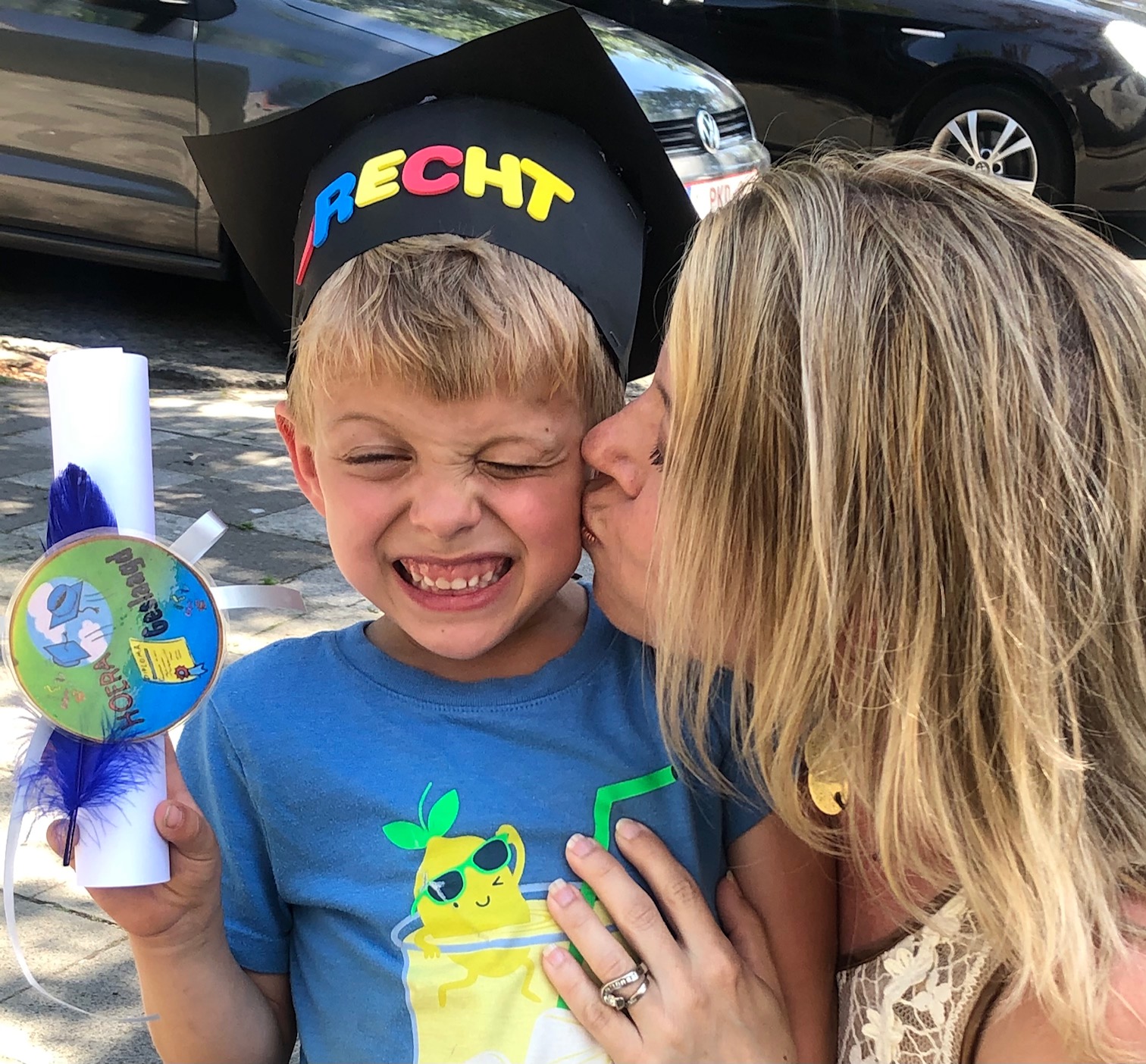 Do you remember those ‘weird moms’? You know. . . You had those friends in high school who were totally cool, but then you visit their homes and the furniture seems to have come from a distant foreign land? Their house was filled with unfamiliar smells – perhaps perfumes or cooking, you couldn’t figure. Maybe before you threw your backpack on the floor, the mom bustles in from the kitchen to greet you into her wide happy arms, speaking to you in a funny accent? She offers you something you’ve never seen before as a snack and you greet it with a weary smile. Your friend then would mirror that smile with acknowledgment and a silent apology?

My children are enrolled in local schools in Belgium. They read, write, and communicate with their teachers and classmates in Flemish. My daughter is one of the best readers in her class. My son is wonderful at math. My youngest, in first grade, is learning to read and he learns new words every day. We quiz him on how to spell them in both English and Flemish.
When my husband accepted the job in Belgium we asked if the company would provide for international schools. International schools are taught in English, are privately funded, and cost an arm and a leg to attend – which is why companies (not individuals) usually pay for the tuition. Subsequent to living here, I know that the Antwerp International School (A.I.S.) is an exceptional institution. I’ve met many current and retired teachers and librarians. A.I.S. and the American Women’s Club of Antwerp have many years of heartfelt history – founders of the school, members of the club, children, teachers, and parents have intermingled in the past. Because my husband was accepting a ‘local’ package, our children were expected to attend the local schools.

It was a setback, but not a deterrent. My children had attended Dutch preschool in the Netherlands. They were familiar with the language. Children are resilient, but it was my own anxieties of being the only foreign (weird)mom in a local school that was my concern

We had one year in Texas between our stints in the Netherlands and Belgium. My daughter, Cosette attended kindergarten at an elementary school in Texas. My husband dropped off our daughter at 7:30 a.m. every day and I was in charge of pick up. There was a drive-thru pickup line. Minivans and SUVs would begin elbowing for spots thirty minutes before pick-up, but I opted for the “walker” option.

We had adopted a walking lifestyle while living in the Netherlands. Every day for three years I’d walk for miles – in rain or shine, pushing a double stroller across cobbles, over canals, and through our local museums, library, and playgrounds. Back in Texas, I decided I preferred not to sit in my SUV for pick up. I was a walker! It soon became my favorite time of day.
I met other Moms as we stood in line to pick up our children. It was a lively group of women and we enjoyed the adult conversation, even it was for a handful of minutes during our day.

In Belgium, I typically stand by myself waiting for my kids to exit the school, but it doesn’t bother me anymore. (Not to mention, with everyone behind face masks now, most everyone is pretty quiet anyway). The kids’ teachers indulge me and speak about our children’s progress during our parent-teacher conferences in English. I have tackled many of the cultural differences – the organization of the sandwich/fruit/cookies in separate boxes, the signing of the agendas, the new corona-rules about drop-off and pick-up. It no longer seems strange to see beer, wine, and champagne served to parents at school events. (Talk about easy fundraising). But there are many of the between-the-lines behaviors that I am often left wondering. . . Is it my own American insecurities or is this. . . Acceptable?

My daughter has been bullied by a classmate for the past few years. Cosette is a strong little girl. She’s had a lifetime of experience during her ten years – a couple of international moves, two little brothers to contend with, speaks and reads two languages, and the fact that she’s an American Girl Scout makes her a proud and fearless student, friend, and daughter. She’s smart, sweet, and cute. “Oh she’s just jealous of you,” I would tell my daughter. “Keep your head up and don’t let the haters bring you down.”

Last year things began to escalate with her classmate. For reasons unknown to Cosette or me, this girl seemed to have a target on my daughter. I brought the issue to the attention of her fourth-grade teacher, in which his response was “Girls will be girls.” He shrugged and so I did too. I thought perhaps I was just being sensitive or overprotective of my daughter (as many misplaced individuals tend to do). It goes without saying, the harassment did not stop.

Cosette started fifth grade and for weeks I received a daily-this-is-what-happened-today report. From tripping my daughter on the stairs to throwing her the middle finger when the teacher’s back was turned, I could see that her classmate was still at it, and my daughter’s resilience was starting to wane.

I felt powerless and conflicted. I wanted to protect my daughter but I was afraid of being dismissed again. I also didn’t want things to get worse for my daughter if I took action. If I was in America, I felt like I could navigate the situation better. But being the weird mom, I was unsure of what my English voice could do.

It wasn’t until I read Melinda Gate’s book The Moment of Lift, that I gained a proper perspective and decided how I wanted to respond to this issue. Melinda Gate’s book covers a wide variety of women’s challenges and issues- from contraception to education to poverty and everything in between. The quote that resonated with me related to my current challenge was the following about outsiders:

I read and re-read that quote again. And while being an American living in Belgium is the definition of an outsider, I also knew that my daughter did not deserve to be treated differently. I also knew I didn’t want to be the kind of mother who just stood aside and let it happen.

When I picked my daughter up from school the next day, I asked her if she wanted me to try and talk to her fifth-grade teacher. I could see the hesitation in her eyes and her carefully calculating the pros and cons of her mother’s intervention. She tucked her head and whispered yes. Before my hesitation could waver, I entered the school grounds and into her classroom.

The teacher was surprised to see me – it was our first interaction. But with Melinda Gate’s words propelling me forward I explained the situation. How for years this little girl had been harassing my daughter and while I brought my concerns to her teacher last year, they were immediately dismissed. “Perhaps, if I was in America, I would call her mother and we’d discuss it, but of course. . . I don’t have that kind of relationship here,” I told her with an apology.

“Oh no, it’s best we handle it here at school,” the teacher responded. She listened to everything I had to say and we agreed that Cosette needed to be very specific about the things that were transpiring between her and her classmate. She told me that she would address the issue the next day. I was flooded with relief and showered apologies to the teacher as my own insecurities flooded the room. We exited the gates of the school and I gave thanks for a sympathetic ear.

True to her word the teacher addressed the girl the next day. “Are you aware that you are upsetting Cosette?” the teacher asked the classmate. The classmate responded that she was unaware. “Well, then I believe we’re going to make you aware. . .” Cosette reiterated the story to me after school the following day. And my heart warmed with gratitude. I felt proud of my daughter, myself, and the teacher who was willing to address the issue in a positive and constructive way.

“One of the biggest challenges in changing the culture is lifting up the self-image of the kids. They’ve had self-doubt planted in their minds by society, the media, even members of their own family.” – Moment of Lift, Melinda Gates

Months later, my daughter is free from the harassment from her classmate. Before the winter break, my daughter’s teacher gave each of her students her personal email address. She instructed them to message her if they were feeling upset, uncertain, or happy about anything that occurred over the break. I am thankful for a teacher that cares just as much about the student’s test scores as their personal well-being.

As for me, I may still be the weird mom, but I’m a proud one too. As my children like to say, we are Ameri-cans! Not Ameri-can’ts and sometimes we need a little push to remind ourselves of the power our voices hold. No matter what language we speak.

Note: I had Cosette review this post before publishing. With a laugh she said, “You’re right, you are a weird Mom,” so I guess I’ve got that self-awareness going for me. I told her I loved her and that she’d stand up for her daughter if she had one too. She agreed.