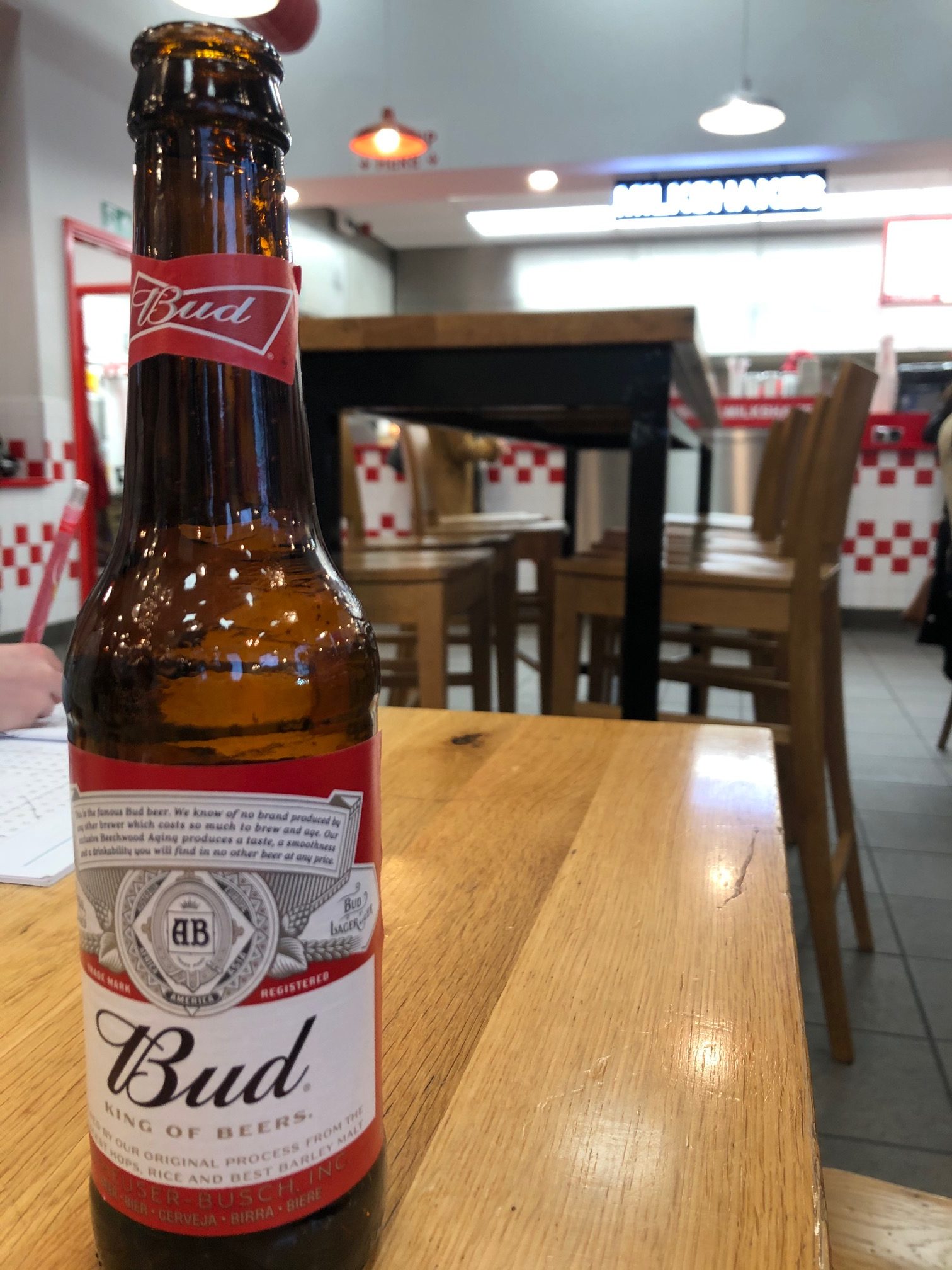 “I want to talk to you about the subject of plans. . . life plans and how we all make them, and how we hope that our kids make good, smart, safe plans of their own. But if we’re really honest with ourselves, most of our plans don’t work out as we’d hoped. So instead of asking out young people, “What are your plans? What do you plan to do with your life?’ maybe we should tell them this: Plan. . . to be surprised.”   – Dan Burns (Steve Carell’s character, Dan in Real Life, 2007 movie)

We had already planned a quiet Christmas – no visitors and no big trips anywhere. In years past, we’d explored Europe – snow-capped mountains in Austria or Christmas markets in Paris or Aachen, but last year. . . we thought we’d enjoy just being at home. We had planned a day trip here or there to shake up the monotony.

The day after school let out for the Christmas Vacation in December 2019, all three of my children were on the couch with fevers. Coughing, sleeping, and battling chills under the Christmas tree. Sugarplum fairies danced through their heads and brought gifts that tasted like imported cough medicine. On Saturday morning, I kissed my husband goodbye and wished him luck. With the Netherlands just 25 minutes from our house, I headed up to the grocery store and post office just across the border to run the traditional Christmas errands of grocery shopping and sending cards. (Everything is less expensive in the Netherlands. . . fun fact – one in three Antwerpians grocery shopped in the Netherlands, at least before the Jumbo moved into Antwerp).

The youngest was asleep on the couch during the school Christmas concert on Sunday. Our middle-child, Holden, dressed as a shepherd while our oldest, Cosette, rehearsed her lines.  The church was just across the street but with the feverish 5-year-old and the rain pouring outside, I told my husband to go ahead without me. I stayed at home with Brecht. I missed a fabulous Christmas performance plus a cava reception for the parents after the concert (you know it’s bad when).

Christmas Eve in 2019, I was trying. I really was. The Christmas songs drifted through our house from our Pandora radio station accompanied by a cornucopia of coughs from all five of us. I was mixing chipotle cranberry meatballs, boiling yams for sweet potato casserole when I heard my youngest. . . Brecht. . . coughing up a storm. The poor little guy coughed so hard he gagged himself. Within seconds, his lunch was all over the newly cleaned golden tablecloth. I was defeated.

I gazed around my kitchen. The sweet potatoes had been boiled but not casseroled. The meat had been mixed but not balled. Cranberries had been washed but not sauced. And had vomit on my dining tablecloth. I never, never give up. I am as stubborn as a mule, but after I wiped up the mess before the dog was able to eat it off my child’s chair, I realized we had to turn this ship around. Fast. I thought about Brecht’s most favorite place in the world.

“Which zoo?” he asks. He is a zoo connoisseur. . . his maps are memorized, the logos engrained in his head by color.

“The red zoo. The one in the city, by the train station,” I said.

He coughs a miserable, heart-piercing cough. “I wanna go to the Orange zoo,” he said.

He looked at me with sweet blue eyes. Coughed a bit again but nodded. “Yes, Mama. I want to go to the zoo.”

“Are you sure?” I hesitated.

And that’s how we ended up at the Antwerp Zoo on Christmas Eve.

The zoo was nearly vacant and we viewed the animals with ease. Brecht held the map in mittened hands and directed us through the zoo – everywhere he wanted to go. His fever had subsided earlier in the afternoon and he smiled for the first time that week.

We left the zoo just before 4:00 inspired and hopeful. My little family of five was headed into the city, but as always, we took a little detour through my favorite place in the entire city – the Antwerpen Centraal Train Station. We walked through the grand hall and the energy and symmetry of the space inspired me. As I’m gazing up at this cathedral dedicated to transport, Vinny pulled his phone out of his pocket. The train station is holy ground, and I shot him a sideways glance. It was as if he’d checked his phone during church, but then he showed me the screen. My best friend from Texas. . .  was calling our Dallas-number-which-forwards-to-our-skype-number-which-forwards-to-our-cell-phones. I punched the button and heartfelt greetings spilled from my lips.

“Hey!!! I’m so happy to hear from you, Nikki!” my words are lost in the vastness of the station.

“Heeeey,” her voice was low. It was still early in Texas. “I’m in Big Spring,” and my heart soared across a country, an ocean, half the United States, the plains of West Texas, across a green lawn with bowing Weeping Willow trees, and into a kitchen with Formica countertops and linoleum flooring. It’s one of my favorite places on earth.

“What? You’re in Big Spring?” my weak smile turned to tears.

“Yeah girl, it’s been a while – I haven’t been here in so long,” and I thought the same. The last time Nikki and I were there together I had brought my daughter for the 4th of July festival. It was during the summer of 2016, between our time in the Netherlands and then moving to Belgium.

But it never matters how long I’ve been gone. I could see everything. I could see the stars outside, their lights dancing, stretching, and falling to the horizon. I could see the coffee pot in the corner of the kitchen, the lace curtain over the sink, and the microwave that holds her father’s plate when he comes home late from work. I could see her and her brothers’ high school graduation photos on the living room walls. In my mind’s eye, I plopped myself into the caster chairs in the dining room and raised my hand for a beer from the side-by-side fridge in the kitchen. Big Spring doesn’t change much. There’s comfort in that.

I gazed at the architecture of Europe – the vastness that I couldn’t obtain and thought about the lazy-boy recliners her Dad lounges in while watching awful old-school Westerns. I was filled with gratitude that she was in Big Spring. And I was so happy she called me. I remember a time when I thought that Big Spring was the edge of the earth, the edge of civilization (which it was!) but for years I’ve been living in Europe.

Her voice comforted me. She asked what we were up to and I told her we are on our way to Five Guys for Christmas Eve dinner.

“What? So that’s traditional?” she’s always giving me hell. In a good way.

“No, but you don’t understand. Brecht is so sick and he threw up and I’m just giving up this year, “ I told her. But she would not accept my excuses.

“What the? You need to get your ass into the kitchen and make something! Where are your tamales?”

She’s right. She’s always right. But she didn’t see the vomit on my glittering tablecloth.

“Dude, I don’t even know where to get cornhusks around here. . .”

“Order them, mija! You are resourceful, you can do it!”

“I had a Venezuelan friend who made these like. . . tamale things in banana leaves. . . I guess?”

“See. . . come on, make it happen” I could see her shaking her head and sipping her coffee.  I know her. But she knows me too.

She knew what I need to do. I needed to Take. Back. Christmas. And she’s was not going to be satisfied with my lazy-shenanigans-5-guys-Christmas. (That’s a reference to Bad Mom’s Christmas – great movie, don’t miss it).

But you know, she was right. We talked about a few other things I had been struggling with at the time. “Yeah well. . . I get that. . . now you don’t really want. . . but that makes sense. . . very positive.” Throughout the conversation, she confirmed everything it had taken me months to conclude. In the end, I felt her Grandfather Papo’s voice and mantra on the other end of the phone. Everything is Fixable.

I hung up the phone with tears in my eyes. But I felt encouraged. I was reminded once again, that life is a journey and we’ve had a wild one with ups and downs, but hasn’t everyone lived about 1,000 lives by now?

We left the Antwerp train station and marched down the Meir to enjoy our 5 Guys Christmas Eve dinner with crappy Budweisers and then enjoyed the Antwerp Christmas market. We lit candles in the Onze-Lieve-Vrouwekathedraal. Once we returned home, Vinny read The Night Before Christmas (regular version and Cajun) and we put the kids to bed amid

the glow of the little tree in their room. With Christmas carols buzzing, I proceeded to get my ass to the kitchen, just as Nikki suggested. She knows. I busted out a Blue Christmas cheesecake, peppermint cookies, a Christmas festive fruit salad, finished those cranberry chipotle meatballs, and put the boiled sweet potatoes into the fridge for later.

As I reflect on my Christmas Eve a year ago, I realize that even my most minimal of Christmas opportunities – going to the zoo, the Antwerp Christmas market, and dining in at Five Guys – are not even options during Christmas 2020. Plans change. What about the things that cheered me up the most? Spending time with my family and receiving phone calls from friends? Those things haven’t changed. It’s the smiles on people’s faces and the laughter over the phone that will connect and carry us through this holiday. And while I am cooking up a mean feast for Christmas Day, I will admit, that we’re getting Five Guys take-out again tonight. Yes, Nikki. It’s now traditional. 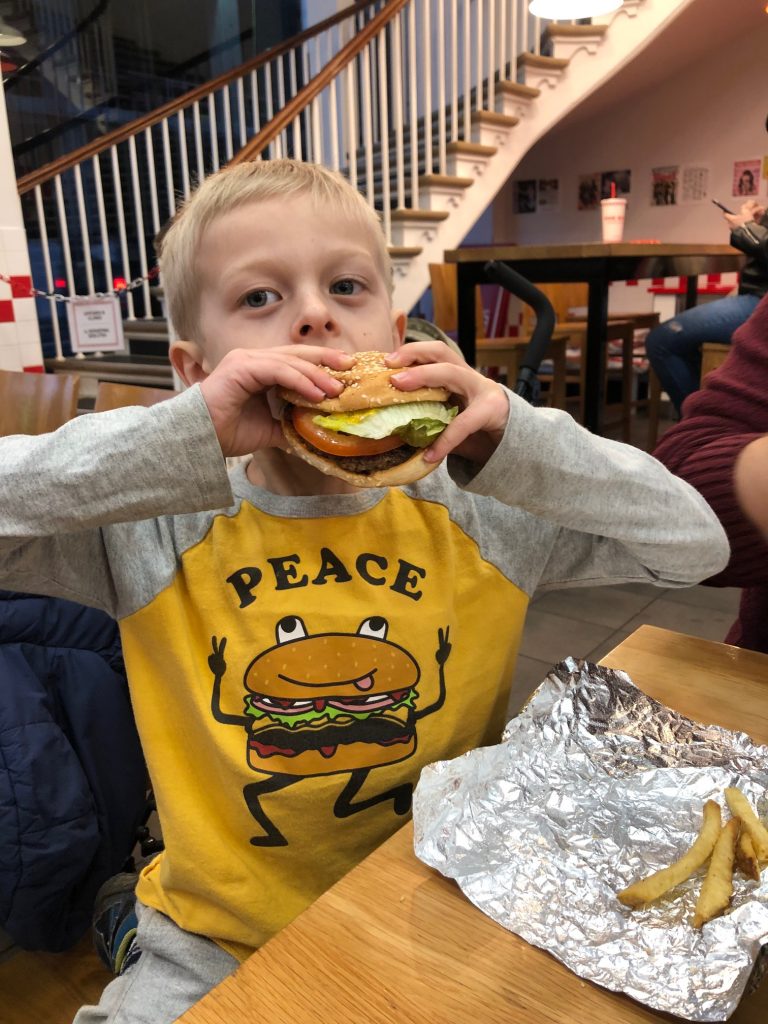