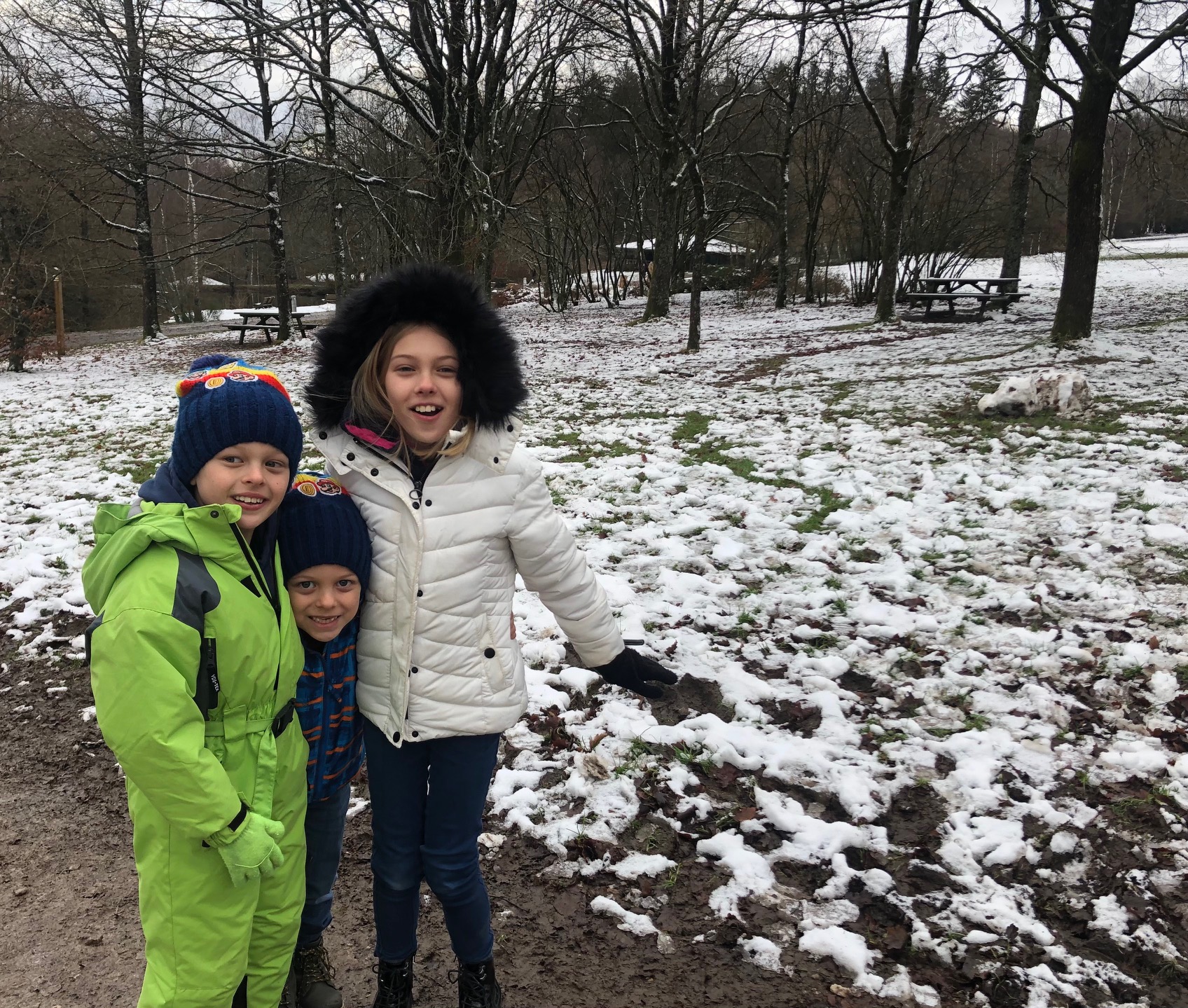 With Belgium in lock-down, there are few options for entertainment during the Kerstvakantsie, but that didn’t bother us too much. After the complete and absolute mania of Christmas (and I was even prepared this year!) we spent a few days at home. Vinny took the kids and their scooters out to the neighborhood ‘square’, played a little soccer, and jump roped. In the meantime, we did a bit of a ‘throwback-to-March-2020-lockdown-routine’. I can’t say that staying at home with three kids is peaceful, (it’s not the gorgeous rainy-day postcard Norman Rockwell would have painted) but it was okay. I put the kids to work on Monday with a list of goals – cleaning bathrooms, vacuuming stairs, taking down the glass (my mother taught me well) with the promised carrot that we’d head to the Belgian Ardennes to see snow yesterday.

They dusted and put away their ‘rainy day fort’ with a vengeance at the promise of snow. They scrubbed toilets, cleaned sinks, and wiped down the tub. My daughter and I ran to the grocery store and picked up ‘snowy day’ picnic supplies.

Yesterday morning we loaded up the Volkswagen Touran with three kids, two adults, and a dog. Destination: the Belgian Ardennes. Hopes: of seeing nature through frosty beautifulness. We put on the Qmusic 1,000 top hits (?) of I-don’t-even-know-when and zoomed down the E-highways.

The Belgian Ardennes is the mountainous region in the Wallonia (French-speaking) part of Belgium and is speckled with towns – both small and large. It is the sight of many WWII battles and hosts a range of thick forests, museums, provincial domains (national parks). In short, it is the get-away playground for tourists and locals alike.

We drove down the highway and my husband plugged Hockai, a small town into our GPS. My daughter’s friend from school visited on Sunday with her family and her 10-year-old friend made the town sound enchanting.

“But where? Where are we going?” my daughter asked, and I eyed my husband with the same weary eye.

My daughter and I looked and each other. I grabbed my phone. “Maybe Belgians can pull this one off, but I think we need a more structured approach,” I told him. I looked at Hockai on my phone in confusion – there’s no park, no Provincial domain, nothing. . . there’s not even a city centre, as far as I could see. I started googling.

Of course. . . we all know the word, Spa. . . Spa is a place for providing health-enhancing properties, and upon my research I realized that this small town in Belgium is the origination of the word. For centuries, nobles have frequented the mineral-rich waters of Spa, Belgium for its beneficial effects on the body.

But yesterday, we were looking for a respite from the monotony of our home and a bit of therapeutic waters (snow, will suffice). In my quest, I realized that what those ancient nobles were seeking was pretty much the same thing that I was seeking – a Spa! I’ve also lived in Belgium long enough

to know that anything labeled a “Domain” is typically a sure-thing (organized park, including a few walking trails, and a parking lot). I plugged the address of the “Domain Berinzenne” into our GPS and it added ten minutes to our arrival time.

Meanwhile, Brecht and Holden were asleep in the back seat. (Typical). Cosette continued to listen to the Qmusic countdown and read. The sun basked through the windows of our car and my husband and I gawked at the rolling hills of the Ardennes.

“Mama, where’s the snow?” my daughter asked. I gazed at the beauty of Verviers around and below us and gritted my teeth.

“Uh, I’m not sure, honey,” I told her. “But perhaps it’s all melted by now. It’s still going to be a nice day,” I raised my eyebrows in hopes of covering up my failed promise.

“I told you the snow would melt,” she said in response.

My husband and I glanced at each other.

“We promised snow, I know,” he told her, “but we’ll just have to see. . . the weather app said there was snow, but there was no way we’d really know. But don’t worry – the weather says there might be snow on Thursday in Antwerp.”

Then Holden woke up. “Hey! Where’s the snow?”

I hung my head.

We drove up the hills. Hills!

I grew up in Plano, Texas. The white settlers named it Plano because they thought Plano was the Spanish word for plain. (Joke was on them! The Spanish word for plain is Llano, but perhaps that one was already claimed by lands closer to the Mexican border. . . ) Either way, I grew up in a land that was flat. My husband grew up in Louisiana (flat, below sea-level). . . then we both lived in the Netherlands (also below sea-level) and Antwerp. Vinny and I are unaccustomed to. . . hills. Driving up a mountain, on a curvy road, and along a steep-treacherous-drop-off-with-a-gaping-ravine-on-our-right? Yeah, the tension in our bodies was visible. My husband griped the steering wheel with white knuckles.

“You’re doing great,” I told him as our Touran escalated to accommodate a 65-degree angle. My palms were sweating.

All three kids were awake (and the dog) and gazed out the sides of the car. Vinny edged the car up the mountain. “Where are you taking us?” he asked

“It’s the domain – it’s gonna be okay,” I told him without conviction.

We drove for two and a half hours. My kids were grumpy. We, as parents, promised snow, and we were failing. Despite my it’s-gonna-be-okay- I also 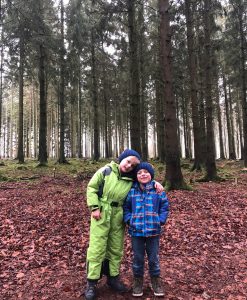 disbelieved my own rhetoric. V pushed our mini-fan higher and higher towards the domain. . . and finally, as we edged our car towards the heavens and with two more minutes promised until our destination (per the GPS), tiny mounds of white began to frost the trees around us.

My eyes widened in disbelief.

Apparently. Spa’s Domain Berinzenne is at the height, the peak, of the adorable town. And even on a particularly semi-cold in December, snow can still be found. Alleluia.

We parked the car and Holden threw on his snowsuit that was three seasons too small. We gathered mittens, hats, and hiking boots and set off to traverse the hiking trails of the park. I don’t know who was more ecstatic – 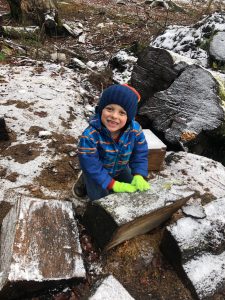 the kids or the dog, but we found snow. The kids packed days-old snow into balls and threw them at each other – they didn’t care. We tromped through mud under greying skies until those skies relented and started spitting tiny, drizzling snowflakes onto us.

“Mama! It’s snowing!” they chanted. And I raised an eyebrow. Kinda.

It was a muddy mess that lasted an hour but no one fell into the babbling brooks or dived headfirst into the muck so I guess that’s a win. They saw snow, and my husband and I took our masks off long enough to enjoy the fresh winter breeze. Our daughter taught us that the moss on the trees grew on the north side and that the mushrooms on the trees were called ‘shelf’ mushrooms – both products of her Belgian education and with those fun facts, I labeled the strange day as a success.

We zoomed back home with the full moon hanging just beyond the right side of our car. Clouds passed by the white globe – obscuring its beauty from view and then releasing it. We pulled onto our city street and unloaded our kids and dog. They were all slathered in mud as they sprinted from the car and across our city street. I gazed back up at the full moon and I thought that the domain would be a beautiful place to visit in the spring. Laden with the promises of new seasons. In the meantime, snow is predicted in Antwerp tomorrow – for New Year’s Eve. I hope so! 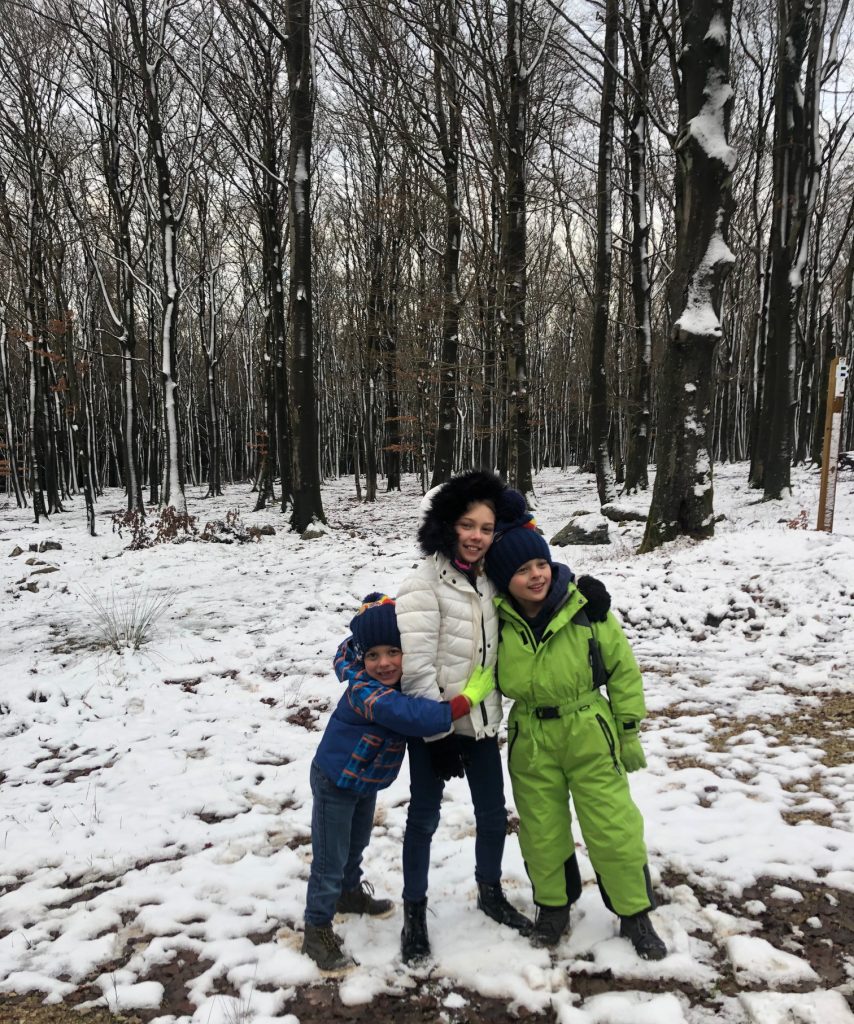