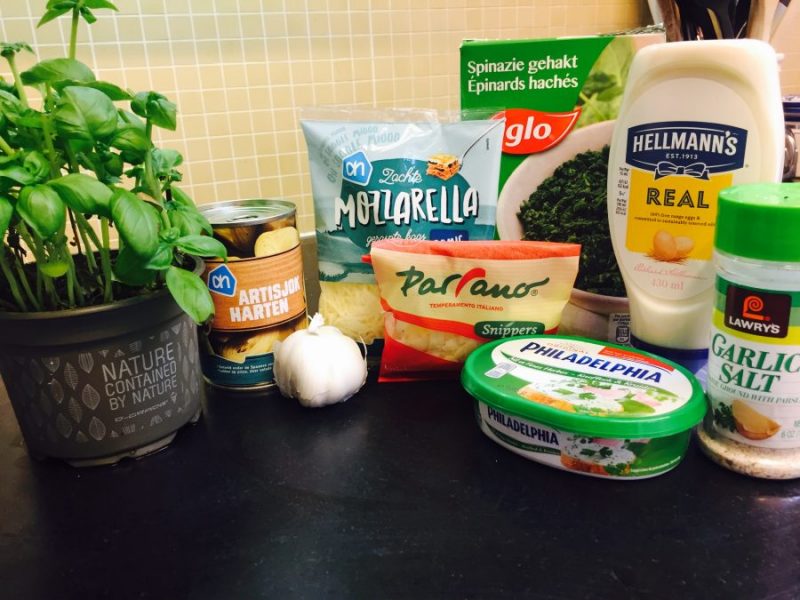 The majority of the members of my bookclub in Leiden were vegetarians and I brought this dish to one of our first meetings. The girls were so impressed.

“Oh my, did you boil the artichokes yourself and use fresh spinach?” the hostess asked.

I laughed, flattered that she thought I’d go to so much effort, and I had to admit – “Uh, no. . . I used frozen spinach and canned artichokes,” and in between mouthfuls she nodded.

“Well, it tastes fantastic,” and we agreed. This recipe is so easy, but tastes like a million bucks.

Mix all ingredients together in a small bowl. Pour into greased baking dish (I’ve used square 9×9 inch pans 23×23 cm and also pie plates). Bake for 25 minutes until cheese is melted and bubbly. Serve with tortilla chips, crackers, or toasted baguettes.

Pearl of Wisdom: Cream Cheese – I haven’t found the “baking” cream cheese packets in Europe, like their silver-wrapped counterparts in the U.S. The spreadable cheese works just fine. I like to use the chives (bieslook) or garlic and herbs (knoflook & kruiden) spreads.

Pearl of Wisdom: Frozen Spinach – Defrost spinach in a colander. Squeeze excess water from the spinach using your hands and/or paper towels. 1 cup or 200 grams of frozen spinach equals ½ cup or 100 grams defrosted.  P.S. – I love that Europe freezes the spinach in blocks the size of ice cubes. If they do this in the U.S., I haven’t seen it. . . I always thought that large block of frozen spinach was such a mess!