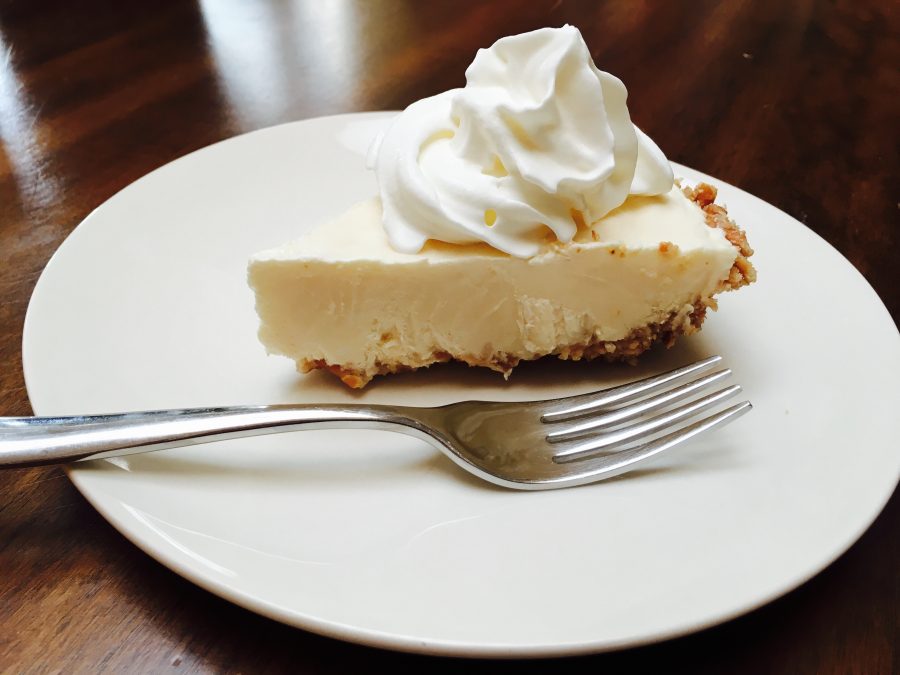 Cool and salty, like an island breeze, describes this Island Margarita Pie. It’s one of my Mom’s most favorite desserts to bring to potluck functions, especially in the summer. I requested the recipe from her, knowing the re-creation in Europe would be the ultimate challenge – the key ingredient is Cool Whip! Cool Whip – not frozen, not watery, but that perfect consistency every time, is not available in Europe (that I know of anyway). I put my Google skills to the test and ran through a couple of trials with errors. The final result (I’m happy to say) is that in the land where good margaritas are hard to come by, I present to you, the perfect Island Margarita Pie.

To prepare filling in U.S.
Combine sweetened condensed milk, lime juice, and orange juice in a medium sized bowl. Fold in cool whip topping and mix until just incorporated. Spoon into cooled crust and refrigerate until chilled (at least 30 minutes). See Pearl of Wisdom, Chilling, below.

In order to make Cool Whip substitute, combine creme fraiche and creme fraiche whipping cream into bowl. Using hand mixer See Pearl of Wisdom, Whipping, below. Beat on high until peaks form. (This is going to be a while, like just when you think there’s no way this is going to work . . . it works.)

Fold whipped creme fraiche into milk and juices bowl and mix until just incorporated. Spoon into cooled crust and refrigerate until chilled. See Pearl of Wisdom, Chilling below.

Pearl of Wisdom, Milk: Sweetened Condensed milk vs. Evaporated milk? What is the difference? Sweetened Condensed milk and Evaporated milk are both milk products in which nearly 60% of the water content has been removed. The main difference between the two is the sugar content. Condensed milk has sugar added, whereas evaporated milk does not. They both have a rice, caramel color. The sugar added during the condensed milk becomes concentrated, adding a caramelized flavor during processing, so while evaporated milk is a low-fat, sugar free cousin – just adding sugar doesn’t quite make it condensed milks’ equivalent. THAT SAID, however – sometimes, in Europe, you can only find one or the other (or your translation gets mixed up and you buy one, thinking it’s the other. Ahem.) I’ve seen condensed milk stocked near coffee creamers in some stores in Europe (like my local SPAR). But sometimes, I can only find evaporated milk. For this recipe, I used evaporated milk and added ½ cup (100 grams) of sugar, and although the dish didn’t turn out as sweet as the recipe calls for, I actually didn’t mind the less sugar. A little more limey and a little less sweet worked for me – and my guests. They didn’t even know the difference. Like I said – I just make do with what I can find in Europe, and usually it turns out fabulous. Margarita Pie experts are few and far between, anyway.

Pearl of Wisdom, Whipping: In order for creme fraiche (or whipping cream) to turn from liquid into cream, it has to be very, very cold. I usually chill my cartons of cream, bowl, and beaters in freezer for at least 30 minutes before whipping. A metal bowl is always a good idea as well. (Mine was being used for something else for this photo op. . . do as I say, not as I do – ha)

Pearl of Wisdom, Chilling: My mom’s recipe calls to let it cool in the refrigerator. I’ve also stuck it in the freezer to get it to really solidify – especially if you plan on transporting it to a party or serving it outdoors on a perfect European summer evening. I let it thaw for about 20-30 minutes in my warm Belgian kitchen (which is probably the equivalent to sticking it in an air-conditioned car in Texas in July on the way to book club) and then it was perfect to cut, slice, and serve.