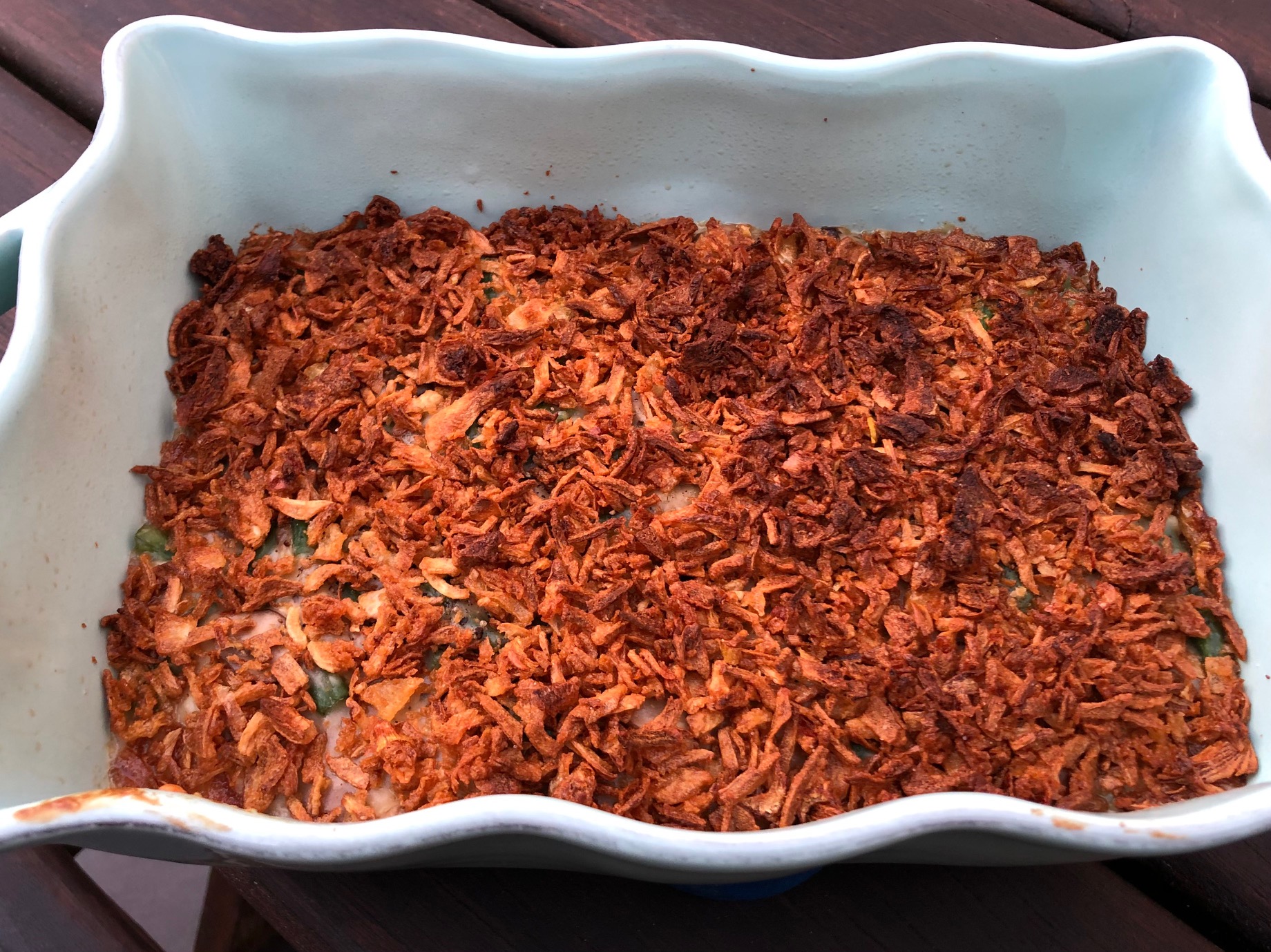 One of my favorite things to eat for Thanksgiving and Christmas is the classic green bean casserole. My first batch was when I was fresh out of college and with canned green beans. Luckily, my cooking skills have matured since then and I’ve adapted that classic cream-of-mushroom soup recipe to the cream-of-mushroom-soup-less country. I’ve made it with fresh fried onions in the past, but the essence of this dish is simplicity, so you can jazz it up if you’d like – but I think this version gives you the balance of fresh and fast. I like using haricot verts, the skinny French green beans because they cook faster and look a little more elegant.

Grated cheese (in Belgium and the Netherlands I used shredded kaas 48+ pittig, but shredded white cheddar would work too)

Chop off ends of haricot verts and slice into smaller pieces. Bring a pot of salted water to a rapid boil. Toss haricot verts into boiling water and boil until ‘al dente’, about five or six minutes. Drain in a colander.

Melt 2 Tablespoons (30 grams) of butter in the now-empty pot and sauté mushrooms until soft, but not soggy. Remove mushrooms to a bowl or plate.

Once again, using the same pot (you can use more, but why wash an additional one?) turn heat to low and melt the remaining 2 Tablespoons (30 grams) of butter. Once butter is melted, add 2 Tablespoons of flour and stir to make a roux. Stir constantly until thickened. Add mushroom soup slowly, 1/4 cup (60 ml) at a time, stirring constantly after each addition, allowing each amount to be absorbed before adding the next. This process will thicken the soup to a similar consistency to cream of mushroom soup.

Once all soup has been incorporated, turn off the heat. Add grated cheese, mushrooms, and haricot verts. Stir until cheese is melted and everything is incorporated.

Spray baking glass or ceramic baking dish with non-stick spray and transfer the contents of the pot into the dish.

Bake in preheated oven for 25 minutes or until fried onions are golden brown.

Note: I originally started writing this post in 2019 but never finished. To my surprise, yesterday during Thanksgiving prep, I had melted my butter and added flour only to find when I opened my can of mushroom soup, that it WAS thick and creamy. The Unox Champignon soep in the red can states in the instructions that you can add a can of water to make a soup, otherwise use it as is. So, I simply threw out the butter/flour roux and went ahead with my can of cream of mushroom soup, as I normally would have in the states.