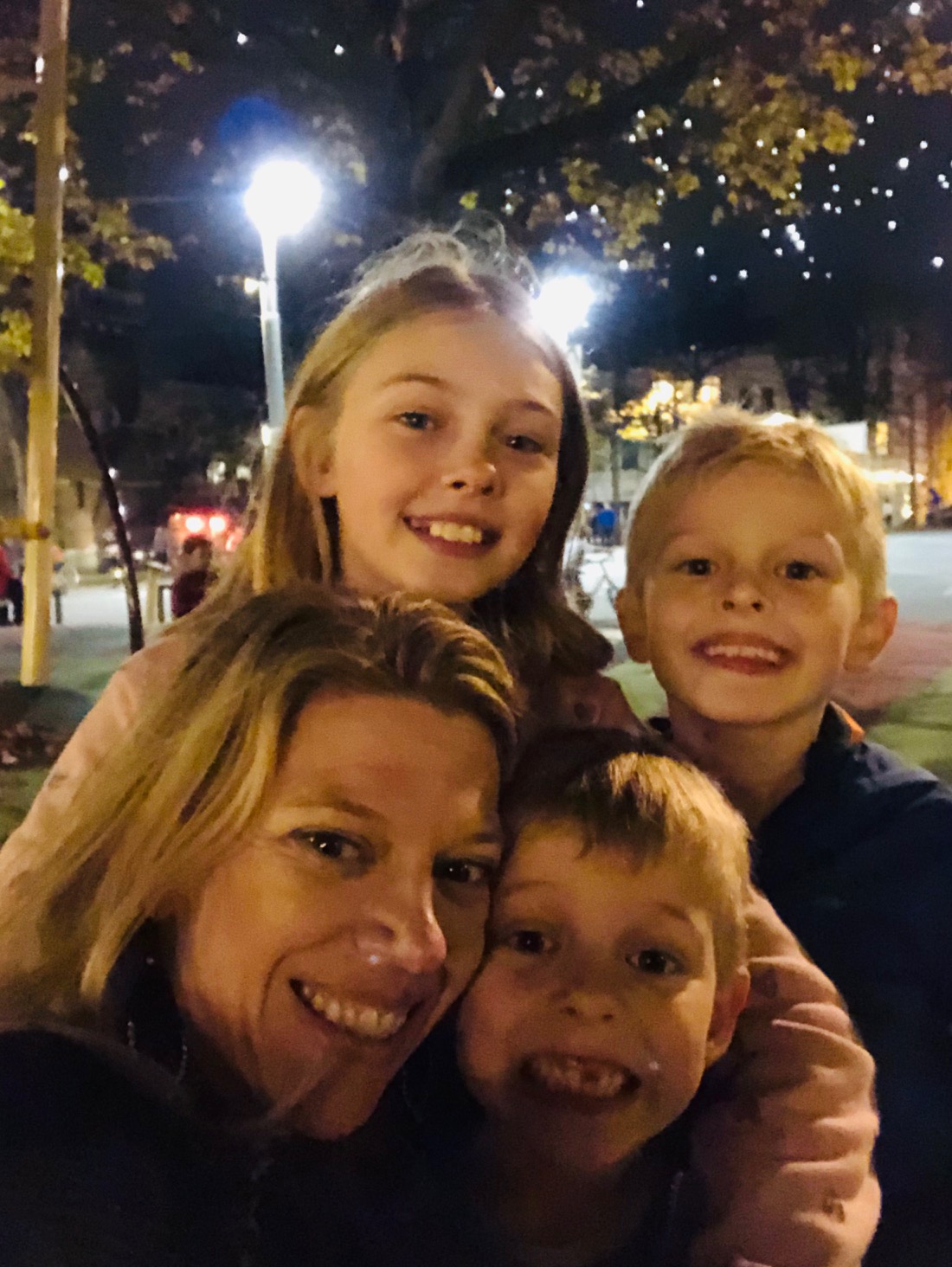 My daughter and I are on our way to the grocery store in our car. The Belgian radio is on and as usual, I’m catching pieces of the news report.

Cosette is in the backseat, listening as well. She interprets most of what she hears, which is more than my quarter.

“What are they saying, Cosette?” I ask and she confirms what I had expected.

“Belgium is going into lock-down again. Well, kinda . . .” A tram passes, I maneuver my car behind it to head to Deurne’s new Jumbo.

I had a feeling.

Belgium is a small country – 11.5 million people. To give perspective, the Dallas-Fort Worth Metroplex is about 6.3 million and the LAX Metroplex is 12.4. Like America, there are approximately a bazillion different levels of government depending on the Flanders/Wallonia Region/Provinces/City/etc. But unlike America, the school schedule is regulated by the Belgian national government. Every year, school begins September 1st. It ends June 30th. Fall vacation is the week of November 1st. Wear-your-pajamas-to-school-day? Yeah, that’s even a National mandate. Cute, huh?

So, when the Government extended the school Herfstvakantsie (Fall Vacation) for an extra week. . . I had a feeling that things were at the tipping point.

When Belgium went into lockdown in March, we didn’t know what was coming. It was impossible to imagine what a country-wide lock-down would entail.

In March, schools were shuttered, and parents picked up bags of workbooks and agendas days later from the sidewalk. Hour-long morning ‘meets’ were scheduled, and assignments were delegated to children (and parents) to complete each day.

The country closed every shop except for grocery stores and pharmacies. (Note: pharmacies in Belgium provide medicine and medicinal advice. Unlike CVS where you can get your prescriptions filled while also buying beer/cigarettes/junkfood. This juxtaposition of products offered by American ‘drugstores’ amazes Europeans).

Bars and cafes closed. Restaurants were open for take-away only.

Working from home was mandatory. Every office was closed. Every employee was grounded. Service employees such as construction workers and maids received government compensation because they were unable to work.

Lines of customers extended from the mouths of each grocery store. A clerk guarded the entrances, waving one customer at a time (no couples or families allowed) into the store as each person exited.

Museums, zoos, and libraries were closed. Playgrounds were roped off. The highways were silent, as the government mandate required us to remain in our city. Brussels, Gent, and Bruges – although within an hour from our home – might as well have been across the ocean.

European countries closed the borders. Out of curiosity, we drove up to a small street that I regularly crossed between Belgium and the Netherlands in Putte. We thought surely. . . people could still quietly cross that small, cobbled road between the countries. But as we maneuvered our car between the sleepy buildings of Putte, the concrete barrier blocking the road was visible from a distance. We U-turned and eyed the military personnel. Their camouflage uniforms were accessorized with automatic rifles, aviator sunglasses, and frowns. Each car was halted, reprimanded with a pointing finger, then slunk away back from where they came from.

Looking back on it, it was incredibly oppressive. It was just so much. But we all hunkered down. Collectively, as a country and a community, we bound together to flatten the curve.

Spring turned into summer and every night at 8:00 p.m., my family and neighbors leaned out our windows and cheered. Our voices echoed off the buildings and lifted into the night’s sky. With our hoops and claps, we gave thanks for making it through another day. We connected with others from the safety of our balconies and doorsteps. We honored the workers on the front lines.

After seven weeks of being in lock-down, the restrictions lifted in mid-May. My children returned to school for fourteen days in June. (Mondays, Tuesdays, Thursdays, and Fridays). Because they are younger than twelve years old, the Belgian government determines that they are at low risk and that they are not required to wear masks. (But the teachers and administrators wear masks).

I held an AWCA board meeting at my house in July – outside in the garden, while a handful of board members zoomed-in. It was the first (and only time) we’ve held an in-person meeting since February.

We thought we were in the clear, but as we entered the fall, the cases started to rise in Belgium again. The news went world-wide – prompting messages from friends in Texas. But yet, I had to wonder. . . what’s going on in America?

The first time you do anything is the most difficult. It’s all the pieces of the unknown, the uncertainties that cloud your confidence, and all the unanswered questions that cause panic.

As the news report on the radio buzzed through the car in late October, I had to pat myself on the back. We knew what to expect and we had already made steps to prepare. . . my daughter and I marched into the grocery store with our freshly cut and styled hair.

That said, the day my children were released for the fall vacation, they exited the school gates with their workbooks in paper sacks – just in case. (The school knew how to prepare also). I teared-up at the sight. I know, it seems trivial to all the other struggles in the world, but my children attending school is such an important part of their growth and development. After two and a half months at home in the spring, I can attest that the benefits of in-school education cannot be simulated at home. It just can’t.

Throughout the entire fall vacation, I kept waiting for the other shoe to drop – the announcement which would conclude that they wouldn’t be returning to school. But that moment never came. They began in-person education once again on November 16th.

Today, restaurants and bars are shuttered once again. Stores are closed until the 13th of December. Work-from-home mandates are the norm. But schools are open.

I’ve talked to many friends, expat and Belgian alike, as we all agree . . . “Belgium doesn’t seem to have taken a hit this time. People are still working. There’s an active energy in the air. Unlike in March when everything felt so. . . dead. This second lockdown doesn’t seem to have phased us at all.” We have adapted. We wear masks, work from home, and order on-line. We’re rolling with it and weeks later, the curve has turned once again.

My family and I have been watching American news programs, talking to friends in the United States, and FaceTiming my family. Looking back over the past nine months, I am exhausted and amazed at how much work Belgium has done and yet, we’re still battling the virus, trying to tame it. (I know no government is perfect). But yet, as I see the cases soaring in America, I worry.

“America is at war,” President-elect Joe Biden stated the other day during one of his press conferences. I am reminded that unlike the country I live in now, this is the first time America has been invaded and occupied, by an enemy.

Living in Europe gives me perspective. During a recent discussion with a Belgian friend I told her, “Even when I get discouraged by our lack of freedom, by the uncertainties and just wanting life to go back to normal. . . I remember that WWII lasted five years. Bombs were falling from the sky. . . Antwerp was occupied.” I told her. “This has to be nothing compared to that. . .”

“Well,” she said, “Actually, my mother-in-law, who was a girl during WWII, said this was much worse.”

“Really? Worse than WWII? But why?” I questioned.

“Well, she says. . . when she was young and the city was occupied, you knew who the enemy was. He was the German soldier standing on the corner. But you ran into your homes and you were comforted by your family. You were consoled by your friends. Now? We don’t know who the enemy is. You can’t run into the arms of your loved ones, because perhaps. . .  they are the enemy.”

I’ve thought about these words so many times over the past few months.

The curfews in the summer were met with animosity, “It’s like Nazi Germany! Trying to suppress the population!” one of my younger Belgian friends told me.

Belgians know what war is like. They know what an enemy is. They know what occupation and oppression is and they how to bind together to gain their freedom back. No country or government is perfect, but I appreciate the general attitude of the European governments and their citizens have taken to try to combat the virus.

“America lost 400,000 lives during WWII,” my Dad reminded me on a phone call the other day. “And that was over four years.”

In December of 2018, my Dad visited us for Christmas. His one request was to visit Normandy. Days after Christmas my family and my father walked along the ocean on Omaha Beach. We solemnly weaved through the graves of the Normandy American Cemetery. All those perfect crosses stretched for acres underneath the grey French sky. They seemed endless and overwhelming. There are 9,387 headstones.

I think about this. . . WWII and soldiers roaming the street corners where I now live. Golden plaques line the sidewalks in memory of Jewish people taken from their homes. The life and loss, the sacrifice and the love – of so many people, so many lives. Forever affected by things we cannot control. But yet, the world goes on – in conflict or collaboration, just like the turning of the seasons, we march forward into the next chapter.

Despite the lockdown and the pandemic my family and I will pause this week, along with Americans around the world, to give thanks. Cosette and I will head back to the Jumbo grocery store to prepare for our Thanksgiving dinner. The celebration will be a quiet one, but our expat life has prepared us for such things. We have spent Thanksgivings abroad surrounded by expat families – grand pot-luck style events. And then we’ve spent quiet ones, with just the five of us. Besides, three kids are a party no matter where you are.

We have our traditions. I will cook up a storm while the kids are at their Belgian school. We’ll watch the Macy’s Day parade in the evening. We will call loved ones after dinner. The world feels smaller now. Despite the distance, we comforted by our family. We are consoled by our friends. We’ve lived overseas long enough to know that distance does not ruin true friendships, but instead makes the moments together that much sweeter. Despite lockdowns and the world’s challenges, I know that I will soon run back into the arms of my loved ones, knowing that they are not the enemy. And for that, I am thankful.