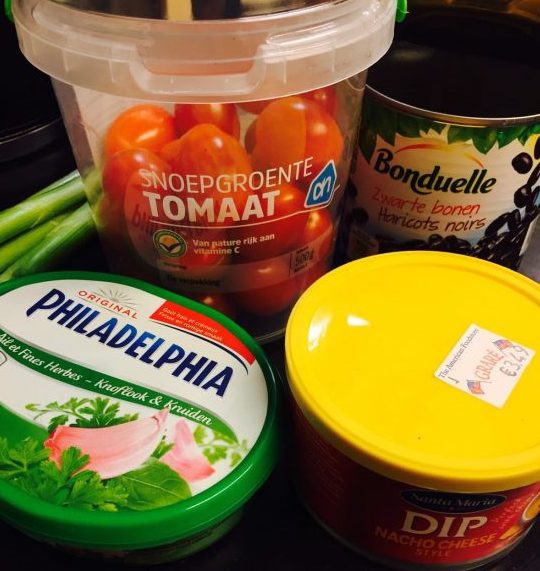 My good friend, Tess is originally from Minnesota and she gave me this recipe years ago when I got married. I can’t tell you how many times I’ve made it – but Texans, Dutch, Cajuns, Belgians, Estonians, Chicagoans, Romanians, and Italians have munched on this cheezy goodness with pleasure. Of course, it took me a while to figure out a substitute for Velveeta in the Netherlands – “What IS a substitute for Velveeta?!” Tess gasped when I told her my dilemma – but once I did, I’d stock up when I found it.

8 oz. (180 gram) cream cheese, softened (Sometimes I like to use the Philadelphia Chives or Garlic and Herbs package in Netherlands or Belgium)
8 oz. Mexican Velveeta, cut into cubes (European readers – See Pearl of Wisdom below)
1/2 cup green onions
1/2 cup tomatoes, chopped (I like to use grape tomatoes cut in half)
1/3 cup beer
1 can black beans, drained and rinsed

In a saucepan over low heat, combine cream cheese, velveeta and beer until melted and smooth. Stir in beans, green onions, and tomatoes and heat through. Serve warm with tortilla chips.

Pearl of Wisdom: Santa Maria boats a line of Mexican products available in many European countries. Their Nacho Cheese Sauce can be used as a substitute for Velveeta. It is sold in 300 gram bottles, which can be used in its entirety for this recipe. Havin’ trouble findin Santa Maria? Don’t stress, Darlin’! Doritos also makes a nacho cheese sauce in 300 gram glass jars which can also be used in its entirety. Just keep an eye out on the amount of beer you pour in – you don’t want to make the dip too runny!