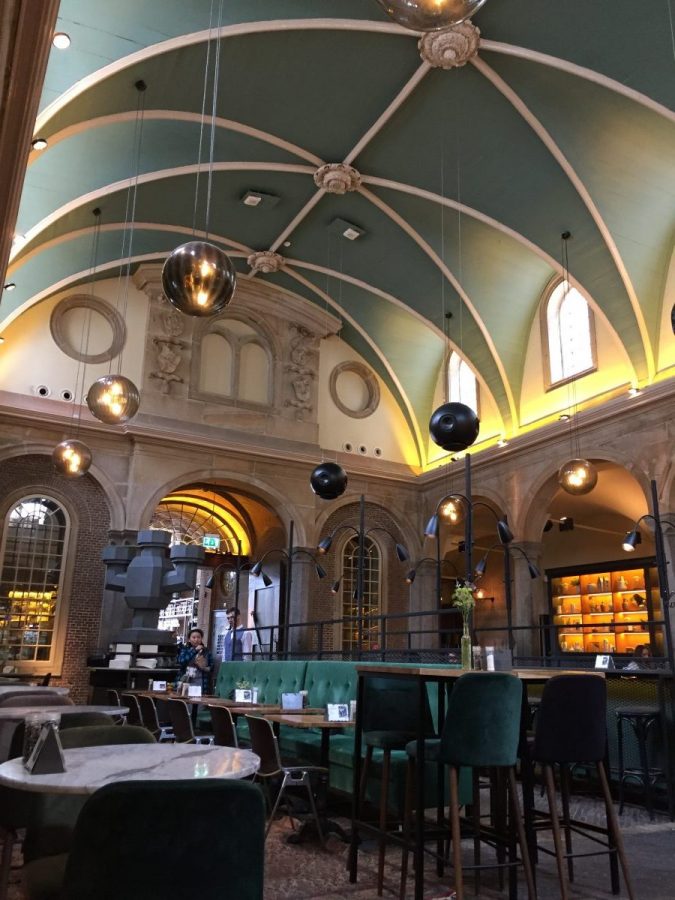 When I lived in the Netherlands, the Leiden Weigh house (De Waag), rich with history, stood vacant at the convergence of the Mare, Nieuwe and Oude Rijn canals. The building was originally opened in 1659, replacing the wooden structure that had stood on the site since 1455. Goods from cities around the Netherlands (think: cheese from Alkmaar or tulips from Lisse) were transported via the canals, and large cranes would unload the goods. The goods were then weighed and traded inside the building.

The building itself was created in the Dutch Classicism style, which is similar to the town hall in Dam Square in Amsterdam. The sculptures adorning the building depict business ventures.

The building was opened a few times a year – most notably as Sinterklaas’ house when he visited Leiden for a few weeks before Pakjesavond. My family, excited about meeting Sinterklaas for the first time, ventured into the building.

The red carpet was dusty with crushed peppernoted cookies, the ceilings cracked, and the columns were peeling. The whole run-down feeling was not enhanced by the lackluster Sinterklaas decorations – dirty, worn shoes lined the floor and cardboard boxes stacked to resemble fireplaces clustered in corners. It was disheartening to view a historic building in its current state of disrepair.

Well. Fast forward a few years later and I’m planning a lunch with some girlfriends from Leiden. One suggested the Waag and I jumped at the opportunity. “Oh yes, I’d love to see it now that it’s been refurbished!” I said. And boy, was I in for a treat.

Tables outside along the canal were filled with sun-soaking Dutch diners of the Waag, but my friends and I walked right past – I wanted to absorb the beauty of the atmosphere. We stepped through the large, open doorway of the grand building and a bar and employees greeted us in the foyer. We stepped past and through the foyer and entered into the cavernous room. My eyes widened as I viewed the magnificent arched ceiling now painted green, the rows of plush seating, and the sparkling bar where Sinterklaas’ shabby chair had once stood.

The menu was just as impressive with a specialties in BBQ – both smoked and a ‘jasper’ style grill. According to the menu, Jasper “is a robust charcoal oven that is simple, functional, timeless and energy-efficient. We use it as a grill and as an oven because, when completely closed up, the Josper can reach no less than 400 degrees Celsius.” (Which, is 752 degrees Fahrenheit) The chicken comes in two flavors – an American style smoky and a Portuguese style spicy.

I ordered the Salmon lunch special – Salmon on cornbread toast with a Thai cabbage and dressing. The presentation was as good as the meal, and reasonably priced as well.

According to my friends – the place is popular – for lunch, dinner, and drinks. Like most places in Leiden, I’d suggest reservations just in case – especially for the evening. I made online reservations from our home in Belgium and it worked perfectly – our name was chalked on a board on our table before we arrived.

Overall, it was a wonderful experience – from the atmosphere, to the food, to the service. I’m thinking Pieter Post, the man who originally designed the building, would be surprised and impressed with what the Waag has become. His beautiful building still beats in the heart of the city – 360 years later.