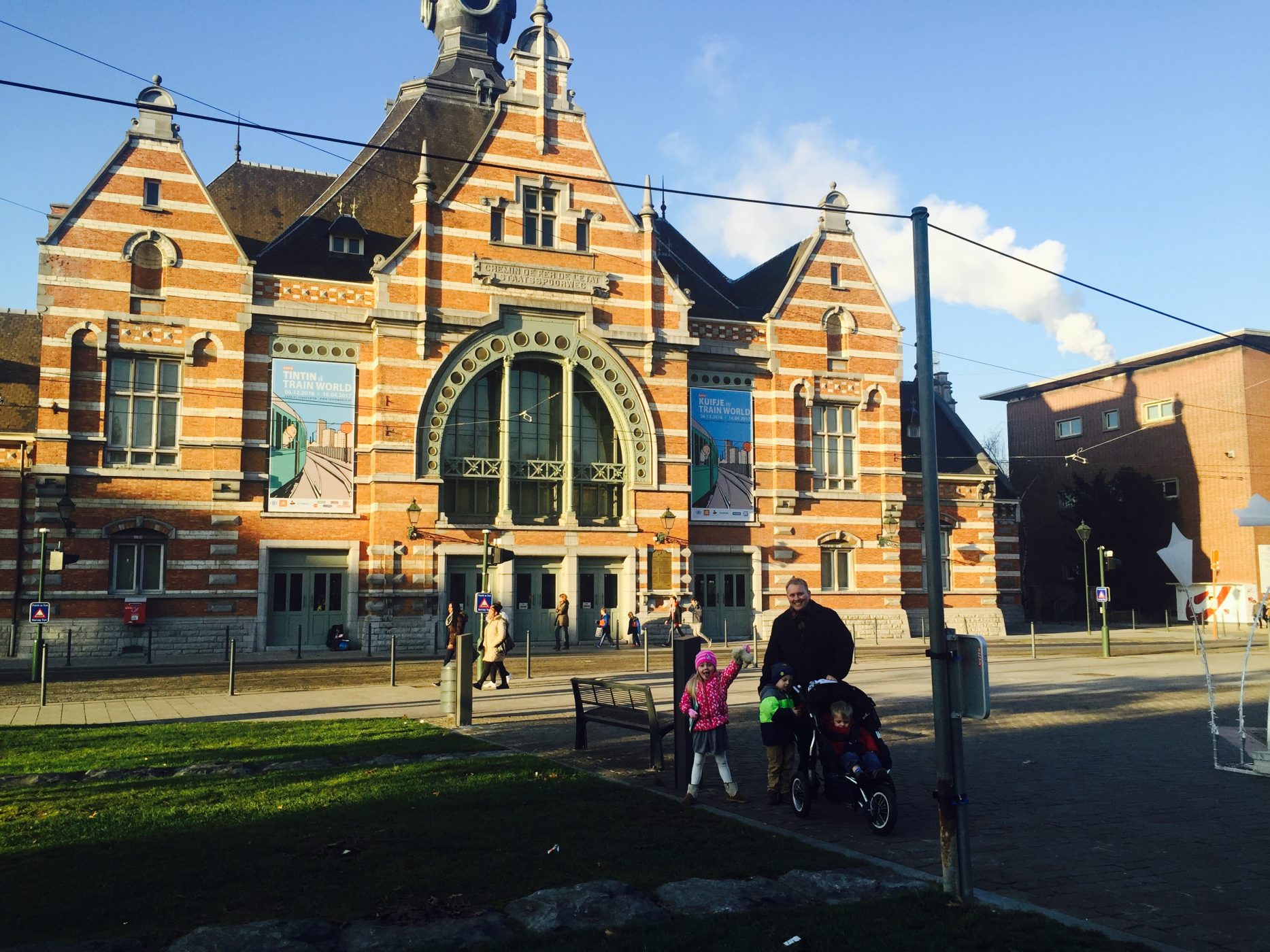 Years ago, my family and I visited the Transportation Museum in London. Together we traced the progression of movement in the city from horse and carriages to red double-decker buses. We climbed aboard Downton Abby-like trains and into shiny taxi cabs. It was an experience enjoyed by the entire family.

Perusing through the local guidebooks from Belgium, we came across the Train World museum in Schaerbeek, just outside of Brussels. On a chilly afternoon during the kids’ Christmas break, we thought we’d go and check it out.

Nestled in the art deco neighborhood, we found the museum parking lot to be full but parked along a neighborhood street with ease. The museum, a converted train station, in red bricks with white cornerstones impressive walk up. The admissions are priced at 10 Euros per adult, 7.50 Euros for kids over 6, and kids under 6 are free. A cafe outfitted in dark woods under the soaring ceiling of the station enticed our senses as we passed – the smell of strong European coffee drifting through the air and snappy waitresses bustling about.

Models of other train stations throughout Belgium encased in glass decorated the grand foyer of the station. We eyed our favorite – the Antwerp Station, of course, snapped a few photos, and headed towards the newly built part of the museum.

Steam engines, restored to their original grandeu, greeted us upon arrival. Children and adults alike ascended into the engine rooms, buttons and knobs calling to be pressed. The lighting of the room was intriguing – highlighting the curves, metals, and strength of the machines.

We walked along the progression of the rails themselves – the widths and formation of the tracks dating back to the 1800s bedded into the floor, ancient picks and axes preserved like fossils in the dirt beneath the glass under our feet.

Throughout the museum, we traced the progression of the Belgian rail from steam to diesel to electric engines. An entire warehouse-like portion of the exhibit dedicated itself to antique train and station memorabilia – clocks, signs, china from dining cars, lights – transporting the museum-goers back to a time when rail travel was seemingly fashionable.

The Orient Express – the most elegant and exotic of train lines – originated in Belgium. Flashes of the movie scrolled above models of the dining and sleeping cars – lamps illuminating fine china and crystal glasses on the clothed tables.

We learned that Belgium was the first European country to deliver mail by rail and explored an old mail car – our fingers running over familiar Belgian city names. The predecessor of the Thalys, Étoile du Nord, was the first train to rush over borders – France to Belgium to the Netherlands – without stopping. American Presidents may have Air Force One, but Belgian royalty traveled via rail and we gawked in awe at the furnishings of an old train. Galleries were dedicated to train art. The tour concluded with an exhibition of trains for the future.

In all, Train World was a fabulous and educational experience – highly recommended for adults and children alike. The museum was handicap and stroller accessible and even the smallest of staircases are outfitted with lifts. Exhibits were translated into Dutch, French, and English.

Days later, driving down the road, my son pointed out the B on a passing train, “Mama! The B – it stands for the Belgian Train Line,” and I had to smile – the recognize and recollection of this museum is going to be an easy one.