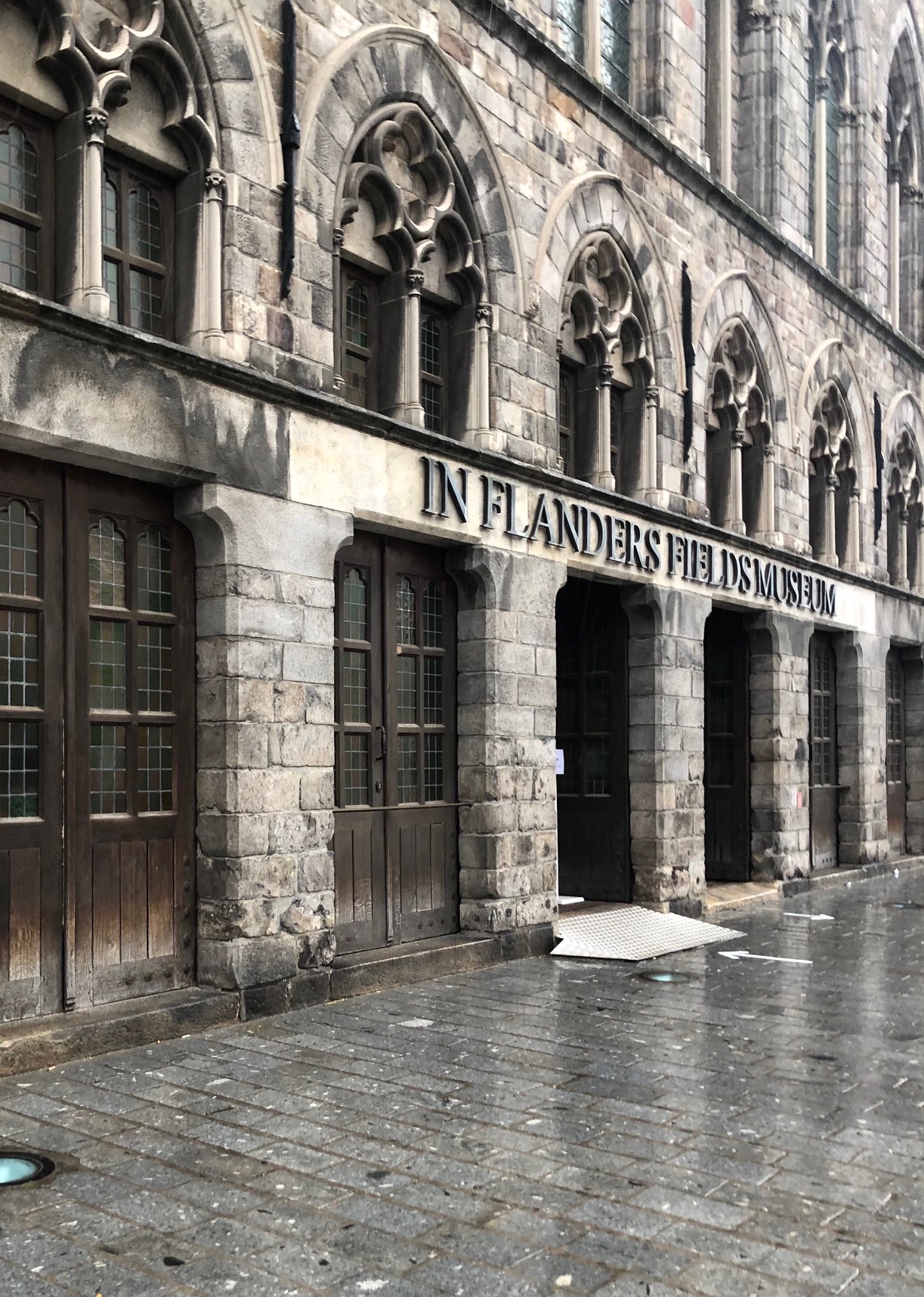 To our credit, we’ve dragged our kids to more WWII museums than most people could muster in a lifetime. But with that, I like to think we’ve created history fans out of them. Or at least out of Holden, our middle child – and that was probably “Papa’s” (my Dad’s) influence as well.

One of my Belgian friend’s family served in both wars. His great-grandfather threw bombs out of planes during WWI. His grandfather was an Antwerp firefighter during WWII. The Boerentoren (KBC Tower today), was completed in 1931. It was not only the first skyscraper in Europe, but also served as a lookout over the city of Antwerp during the WWII. Perched high above the city, his grandfather scanned the skies and the city for planes, bombs, and fires. With every detonation, he sent messages to his colleagues on the ground – prompting them into action to help save the homes, buildings, and lives of Antwerp.  With a shiver, I can only imagine that my friend’s grandfather helped remove the rubble and the bodies from the Rex Theatre after the V-bomb explosion in December 1944.

My interest in war history and his personal knowledge and Belgian connection with it has pointed me in many directions to research. He had told me years ago that my family needed to go to Ypres, Belgium because of the amount of history in the region. With Ypres being just an hour from Bruges (and a terrible, rainy forecast on the horizon for Saturday) Vinny booked us tickets to The Flanders Field Museum for Saturday afternoon.

With raindrops pelting our car on Saturday afternoon, we drove southwest of Bruges with the fields of the Flanders region of Belgium stretching towards the horizon. We parked in the city center of Ypres and stepped onto the glistening cobbles in the dim light of the afternoon and headed towards the Lakenhal.

In Flanders Field Museum is housed in an ancient Cloth Hall (Lakenhal in Dutch – fabric, cloth, & textiles were of great significance of trade during the middle ages. Leiden, the Netherlands also has a Lakenhal which has been turned into a museum worth visiting.)

We were greeted by friendly museum staff upon arrival. We handed over our reservations and spoke through our masks. The man handed us five audio guides, which hung around our necks from a lanyard, and some hand wipes.  The audio guides were headphones free but rather operated as a phone.

We met his colleague by the entrance who instructed us to choose the language we wished to view the exhibition (point and scan your audio guide towards your flag), but also explained that there were three ‘tours’ you could follow.

The regular tour was numbered and gave a high-level, yet informative explanation of each display. The ‘poppy’ route, signified by large red blossoms, were geared towards the children visiting the museum. The in-depth or ‘further’ reading. . . were signified by the green signs. While all overwhelming at the beginning, in practice it was easy to follow.

We entered the grand hall and were immersed into a timeline beginning before 1914. The Industrial Revolution! Patriotism! Competition! Then, we were catapulted into the timeline of the WWI – the initial shot, the alliances, propaganda, commercialism, the battles, the victories, the failures, the entry of the U.S. into the late stages of the war, the uniforms, and the treatment of the wounded (or lack thereof). We combed the lands surrounding Ypres and felt the weight of reality – all of the land from where we stood, behind us, and towards the sea, were battlegrounds.  A land of sacrifice and burial for over 500,000 men from all over the world.

My children were intrigued, running from display to display – searching for the poppy sensors, scanning, and listening to their ‘phones’. “Mama, Daddy,” Brecht, our six-year-old tugged on my jacket, “There were many horses that died in the war, too.”

I scanned my own phone to a poppy (children’s) commentary. I learned about a dog in the trenches who chased, caught, and delivered dead rats to his infantry soldiers. I learned about the problems of the trench rats in a way that made me cringe, but as Brecht’s eyes grew wide too, I understood that he was very entertained in a gruesome way. “Eeewwwwww!” we both said before he ran off to find another poppy.

I scanned my audio guide on all the numbered displays – thus giving me the ‘regular’ tour. Had I been without kids, I might have scanned many of the more ‘in-depth’ tours, but as it was, I loved the flexibility to scan just a few related to the displays which interested me most.

I’d heard about the Christmas celebration between the French, British, and German soldiers – in which both sides called a truce for the holiday, laid down their arms as foes, and gathered together as people. They sang carols, exchanged

seasonal greetings, and swapped mementos. Upon scanning the ‘learn more’ route I heard an expert debate about whether a game of football was actually played between the teams – in the end, she concluded: myth or not, it adds to the legend of the camaraderie that fell upon those soldiers in December 1914.

The displays were dazzling, well-illuminated, and intriguing. The audio guide ensured both adults and children were educated and entertained. The stories shed a humanistic light – illustrating the uniforms of the soldiers, the toys the children of the war played with (Tanks! Lots of tanks!), and the challenges of the civilians to gather food.  And just as I was satisfied with our museum experience, we came upon the poem.

In Flanders Fields. Of course, we all know it. But. . . after living in the Flanders region of Belgium for almost five years, I realized Flanders Fields are all the lands, the fields in the western province of Belgium which were the site of so many terrible and bloody battles.  Before and after the war, the cows roam and farmers have plowed those same fields. Over a hundred years later, they are still finding remnants of the war. Even today.

The poem, In Flanders Fields, was penned by a Canadian soldier, John McCrae, after the death of his friend, Alexis Helmer. It is thought that his poem was thrown away, but his fellow soldiers found it in the trash and sent it to Punch

magazine in London. It was published in December 1915.  With his poem, the poppy became a universal symbol of remembrance for WWI.

Upon conclusion of the tour, my children bounded down the stairs and sprinted towards the gift shop. (I remember this was always my favorite part of museums growing up. It’s a habit that doesn’t really fade.) With a smile, I exchanged cash for a bag decorated with poppies and a book of WWI poems.

As we exited the museum and darted through the raindrops once more, I punched a detour into our GPS on our way back to Bruges. “It’s only twenty minutes out of the way,” I told my husband. “And Papa would want us to go.”

We arrived at the Flanders Field American Cemetery twenty minutes before closing and paid our respects to the 368 soldiers and 43 missing in action who rest in a field in Flanders.

“How was your visit to Ypres?” my friend wrote me today.

“It was great. I learned a lot. The research center was closed due to COVID, but they had this separate database and found this person’s name in the system. . . is he a relative of yours?” and I sent him the name of a soldier with my friend’s same last name, born in Brasschaat who died in the war.

“I don’t know, actually could be,” my friend wrote. “Did you type in your own name?” he asked. And I laughed a bit. I hadn’t even thought of that. I had entered a handful of the Belgian surnames, but I hadn’t considered my own. To his point, he was right. In this small corner of Belgium, the citizens of the globe collided and are remembered.

In Flanders Fields, by John McCrae

In Flanders fields the poppies blow

Between the crosses, row on row,

That make our place, and in the sky

Scarce heard amid the guns below.

We are the Dead. Short days ago

Love and were loved, and now we lie

Take up our quarrel with the foe:

To you from failing hands we throw

The torch: be yours to hold it high.

If ye break faith with us who die

We shall not sleep, though poppies grow