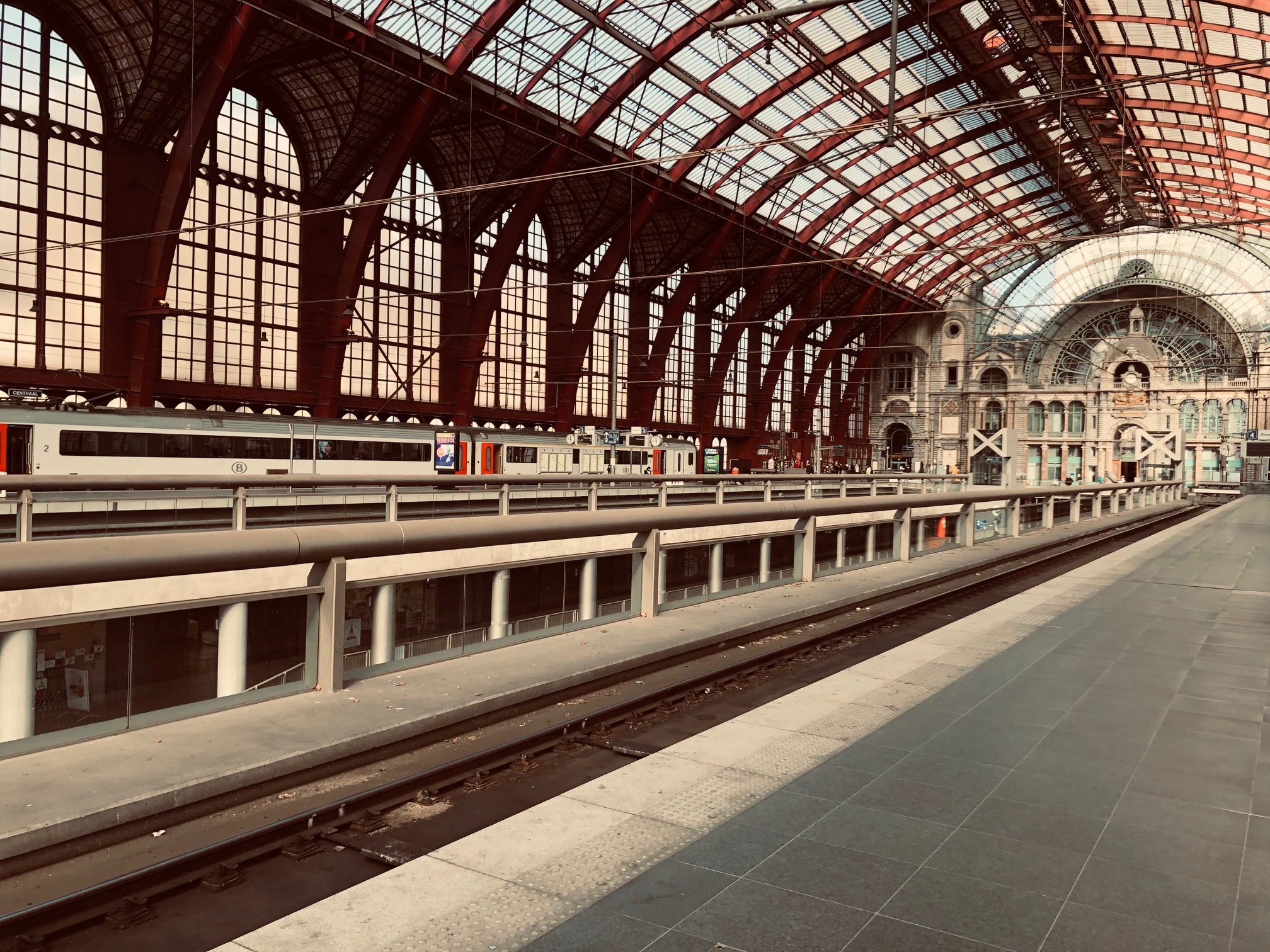 I recently took an online photography workshop hosted by one of the members of the American Women’s Club of Antwerp. Brigitte Meuwissen is a talented photographer and her workshop The Art of Seeing shed light on the history of photography and the basic elements of crafting photographs. My photography knowledge is limited – starting with the definition of photography. . . which in its most literal terms means Writing with Light. During these strange COVID times, she taught us how to create photographs of our own homes – looking out our windows, seeing the shadows within the rooms, and capturing portraits of our loved ones.

She encouraged us to research famous photographers and showed us some of her own work. As we leaned over our computers during our ZOOM meeting, I was intrigued by a series of work she had compiled. As she scanned through the photographs, she explained that she had instructed each of her subjects, all women, to pick her most favorite place in all the world. Then she would photograph them in their most beloved spot. Many were in nature – a random brook in a large forest, a garden, or a field stretching to the horizon. She explained that the women’s confidence grew in these spaces. Their body language altered. Their spirits soared. And it had me thinking. . . if I had to pick a handful of places in the world that were my ‘favorites’ where would they be?

Of course, my Grandmother’s house in Lubbock, Texas would be at the top of that list. It’s only a childhood memory now, but her house is as real to me as my own. It was a tiny home – each room packed with florals, full of beautiful details, and wonderful scents. Her laughter and snores were both hearty. And her Grandfather clock chimed throughout the day and evening. I was lucky enough to inherit many of her beautiful things and furniture (and I like to think a few of her good decorating and hostess skills.)

Where else would I list as a favorite place? Walking in the sun above the glistening canals of Leiden, the Netherlands. My college dorm room with its Baylor-green carpet and pegboard tacked with high school photos. My best friend’s childhood home in Big Spring with its weeping willows and rooms full of cigarette smoke, Bud Light bottles, and laughter. A Paris side-walk bistro with a cup of coffee (or better yet, a glass of wine). A Death Valley tailgate under curly oak trees in Baton Rouge on a Saturday afternoon – the air scented with Cajun spices and charged with anticipation for the big game. The Brooklyn Bridge at night – the traffic and white headlights zooming below your feet. As I glance at my list, I see myself teetering between comfort and awe-inspiring – many times. Both.

That said, one of my most favorite places in all the world is also just a ten-minute walk from my house here in Antwerp. I fell in love with it the first time I stepped under the grand rotunda and gazed towards the stairs and into the windows separating the arrivals hall from the train shed. The Antwerp Central Train Station has the aurora of a cathedral: its symmetry is calming. But it is the energy of the locomotives, the passengers, and the passers-by that electrifies and echoes off the walls. 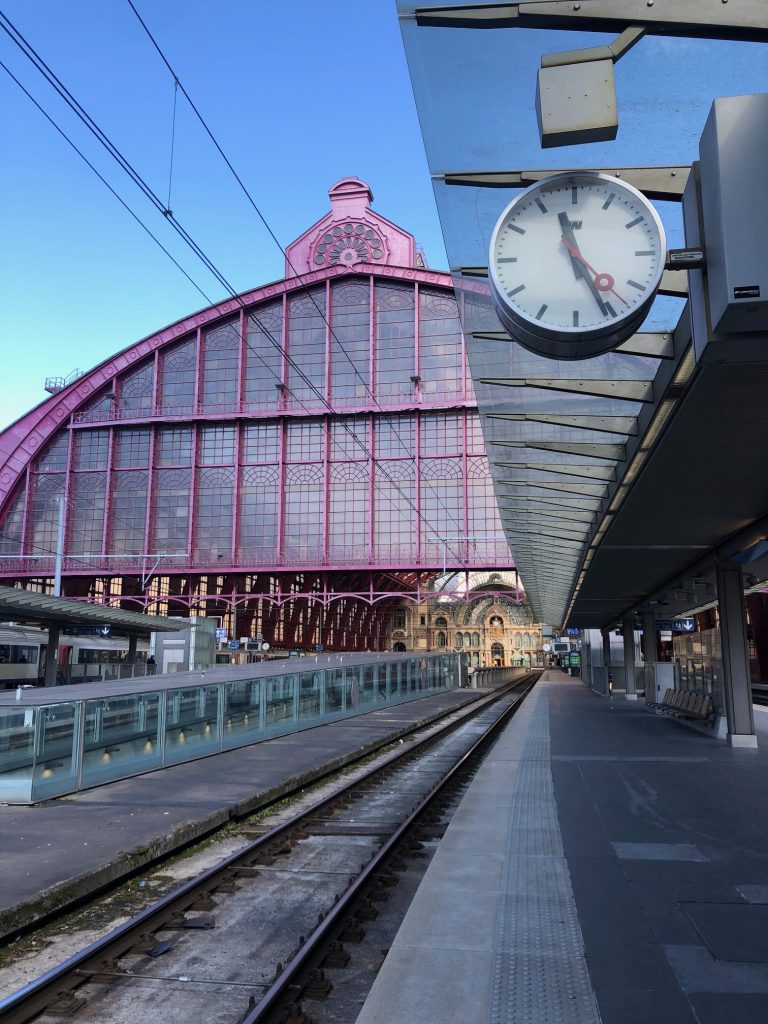 King Leopold II had commissioned the train station to be built yards away from its predecessor, which was nothing much more than a wooded shack in what is now known today as Astridplein. The train shed was a marvel in its time (and still amazes the traveler today). The steel and glass train shed was designed by state engineer Clement Van Bogaert and was inaugurated on July 15, 1898. After the shed was completed, the construction of the terminus station began. Louis Delacenserie from Bruges was awarded the project (much to the dismay of the Antwerp public).

King Leopold encouraged the design to be influenced by the Lucerne Railway Station in Switzerland and the Pantheon in Rome (thus the huge dome above the arrivals hall). King Leopold had expanded his empire to colonize Zaire (establishing the Belgian Congo). He both exploited and was fascinated by Africa. His initials mark the arrivals hall and lions have gazed at the passersby below for over a century. 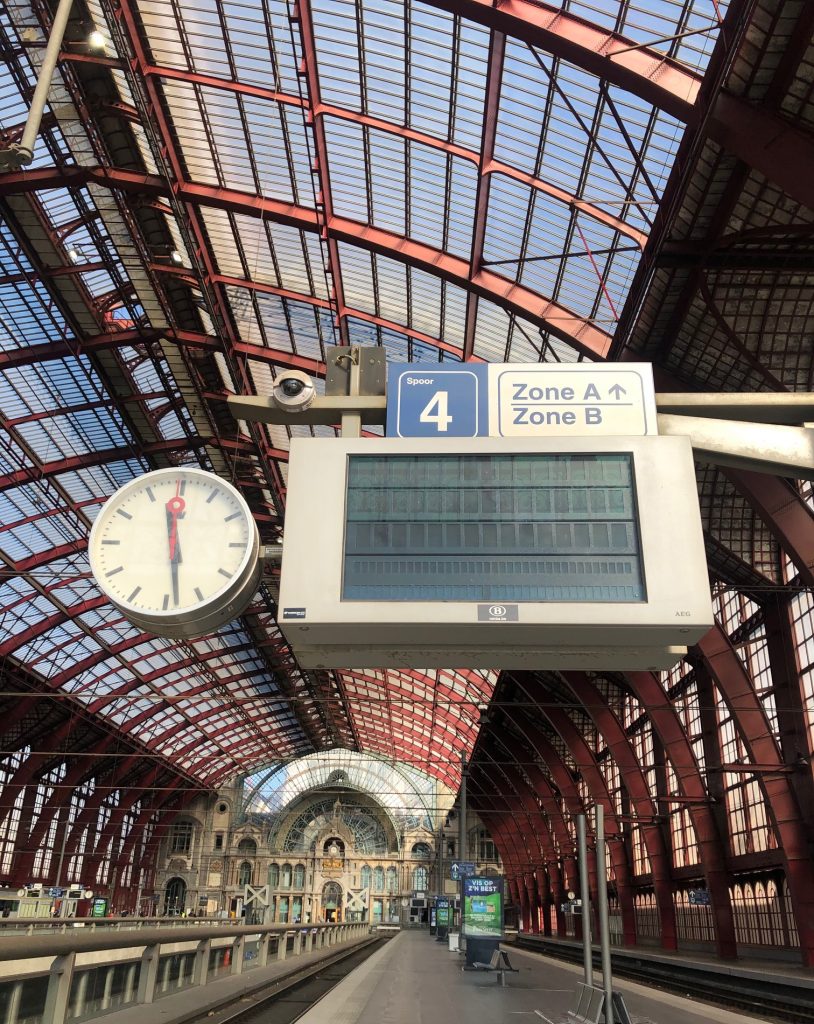 During WWII, the Germans removed the copper roof of the station during the occupation and melted it down for weapons. After the war, the station fell into dilapidation. There was talk of it being demolished, but in 1975 the building became listed as a protected monument.

The station had its challenges, though. When it was first built, the station was a terminus station. The trains could pull into the station from the south via a raised railway viaduct (which is a block from my home, which was also built in 1898) but had to pull back out in a loop-like fashion along the perimeter of the city to head towards the Netherlands.

In order for Antwerp Central Train Station to become relevant once again in the 1980s, the station would need to undergo reconstruction so high-speed trains would be able to continue their journey northwards towards the Netherlands without turning. Eurostation came to the rescue.

The solution was to build 3.8 km (2.3 mile) tunnel under the train station and under the city. Of course, this plan was met with considerable resistance, but Eurostation won over the authorities with its plans. In addition, Eurostation helped restore the outward appearance of the station to its former glory.

Today, a 20-meter chasm exists where the railway once glided into the station at ground level. Determined to allow light to penetrate even the lowest depths of the station and allow visitors to have an instant view of the beautiful arrivals’ hall, the newer railways were arranged at the sides of the atrium. 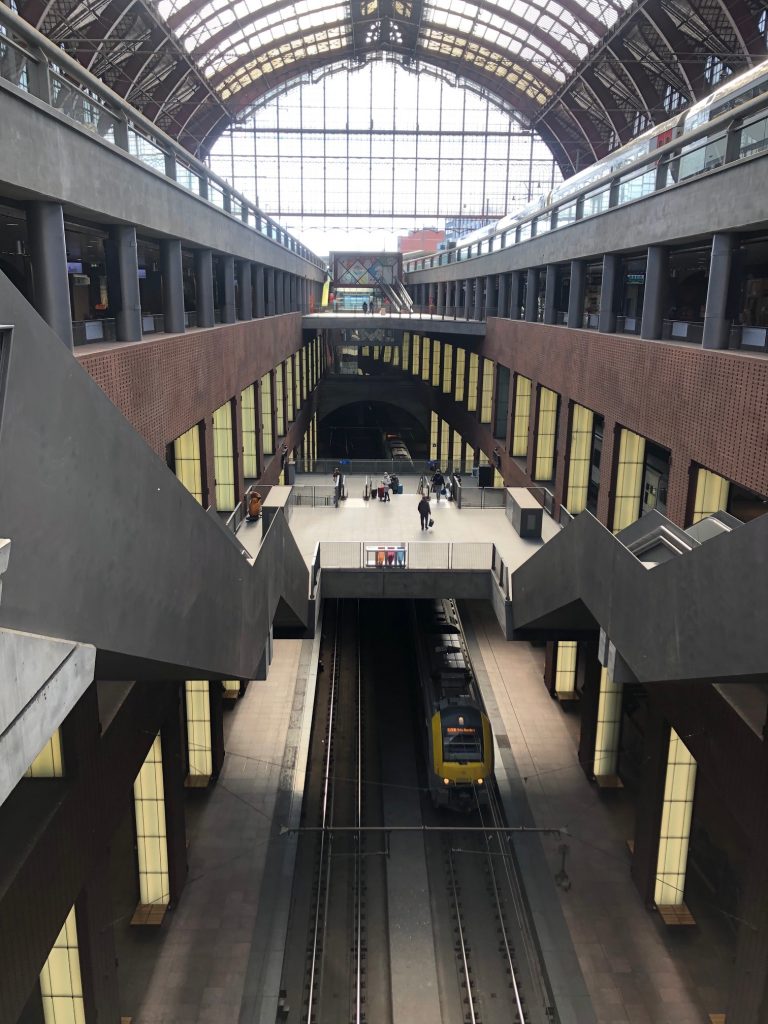 A few weeks ago, with restaurants and café’s closed I was in search of somewhere to go besides my own house. I walked into the city to my favorite place. I sat under the dome of the arrivals hall. I sat on a bench under the train shed. I watched the trains come and go. Feeling the energy of the space, I opened my computer and tried to write. (Unfortunately, my fingers were frozen, and I didn’t type much. We’ve had quite a cold spring, but the sentiment is there.)

But with Brigitte’s voice echoing in my head, I watched the light filter through the station and created these photos. I discovered details I had never noticed before. I saw one of my most favorite places, a place I’ve visited 100 times, with a new perspective. With a newfound spring in my step, I headed back to Zurenborg. Ready to write in the warmth of my home. 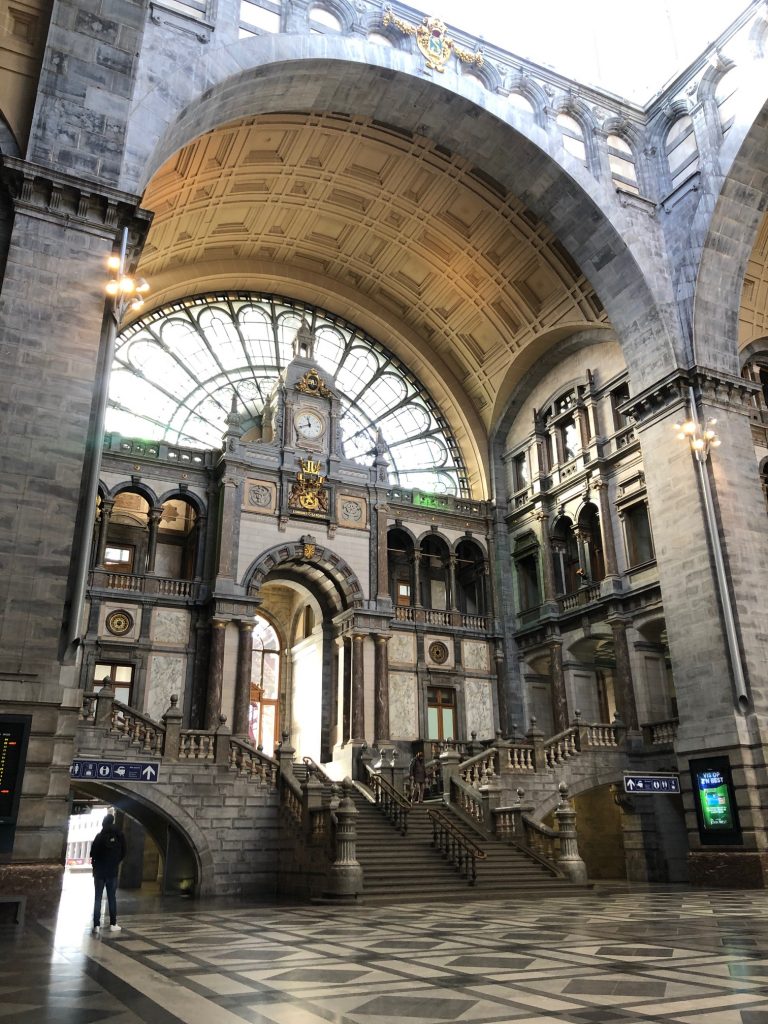 Note: My family and I frequent the Brasschaat library and while their history books are written in Flemish, I’ve discovered the Architecture books sometimes are translated into French and English as well. The information I’ve included in this narrative comes from various sources but also a book called Antwerp Central World Station, architecture by Jacques Voncke, Eurostation, and Photography by Filip Dujardin 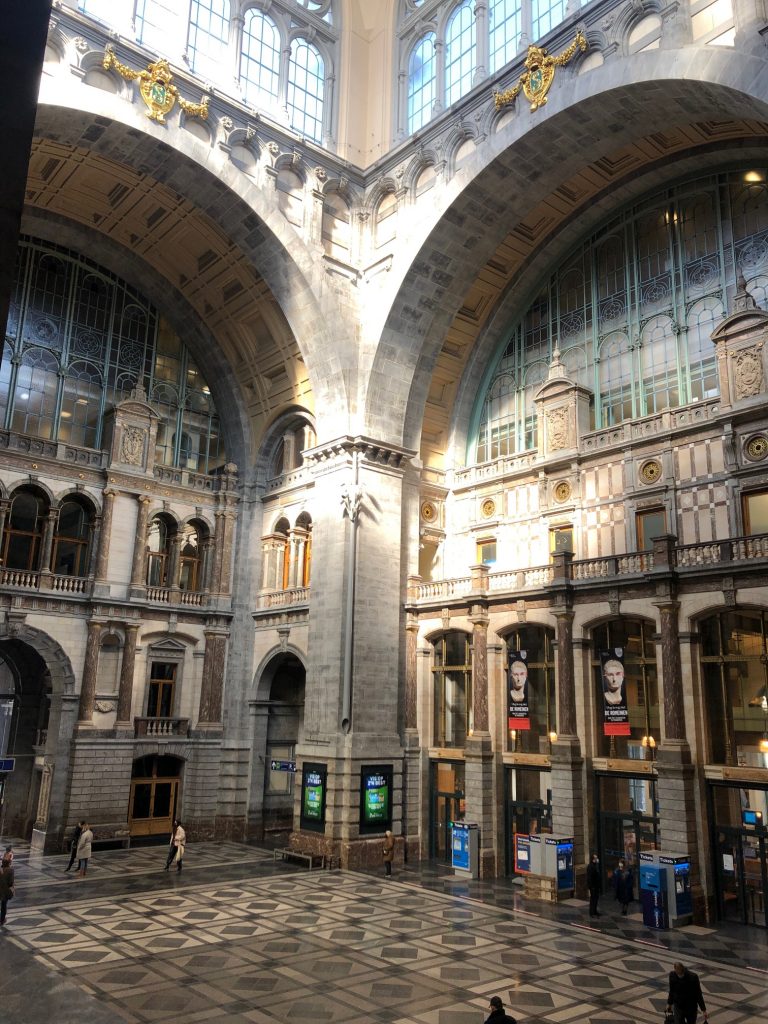