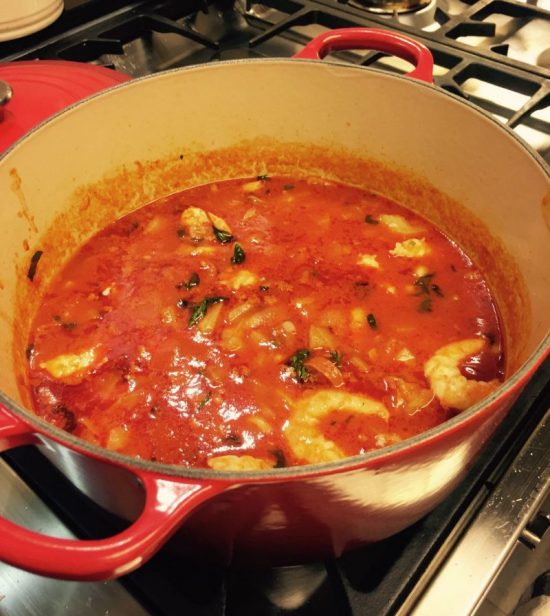 One of the first things I noticed after moving overseas was that the winters in the Netherlands are long and cold. “We ain’t in Texas, anymore” The second was the energy I expended daily just living in Europe – the walks to and from the store (the library, school, the train station, etc.) are just as long and cold as the winters! My old days of a simple canned soup and grilled cheese sandwich for dinner were quickly unfulfilling. “I’m so famished, I’m about to faint!” I’d tell my husband after pushing a double stroller through the streets of Leiden. Luckily, I’ve discovered a few stew recipes that are just as filling to my stomach as they are to warm my insides.  (And the children love this one too!)

In a Dutch oven, heat the oil over medium-high heat. Add the fennel, garlic, shallots, a couple shakes of salt and a couple grinds of pepper. Cook, stirring occasionally, until the vegetables are slightly softened, about four minutes. Add sausage and sauté until heated through.

Add the wine and scrape up any browned bits at the bottom of the pan with a wooden spoon. Add tomato paste, chicken broth, and bay leaf. Bring to a simmer, cover, and cook over medium-low heat for 10 minutes.

Uncover the pan and add the shrimp, beans, basil, and thyme. Simmer, uncovered, until the shrimp is pink and cooked through, about 4 minutes.

Remove the bay leaf and throw away. Serve warm with a side of crusty French bread.

Pearl of Wisdom, Fennel – In the U.S., or Texas at least, fresh Fennel or Anise is a little hard to come by. I found it at Central Market and Market Street but it was often expensive and brown. The freshest and best priced was the one I found was at Trader Joe’s.

Pearl of Wisdom, Spanish Chorizo – Both Netherlands and Belgium stock dried sausages typically on end caps or in the deli section of the store. The spicy dried Spanish sausage has fabulous flavor. In the U.S. I also found dried chorizo in the deli section – it’s a bit pricey, but very tasty. You could opt for the raw chorizo near the breakfast sausage part of the store as well.