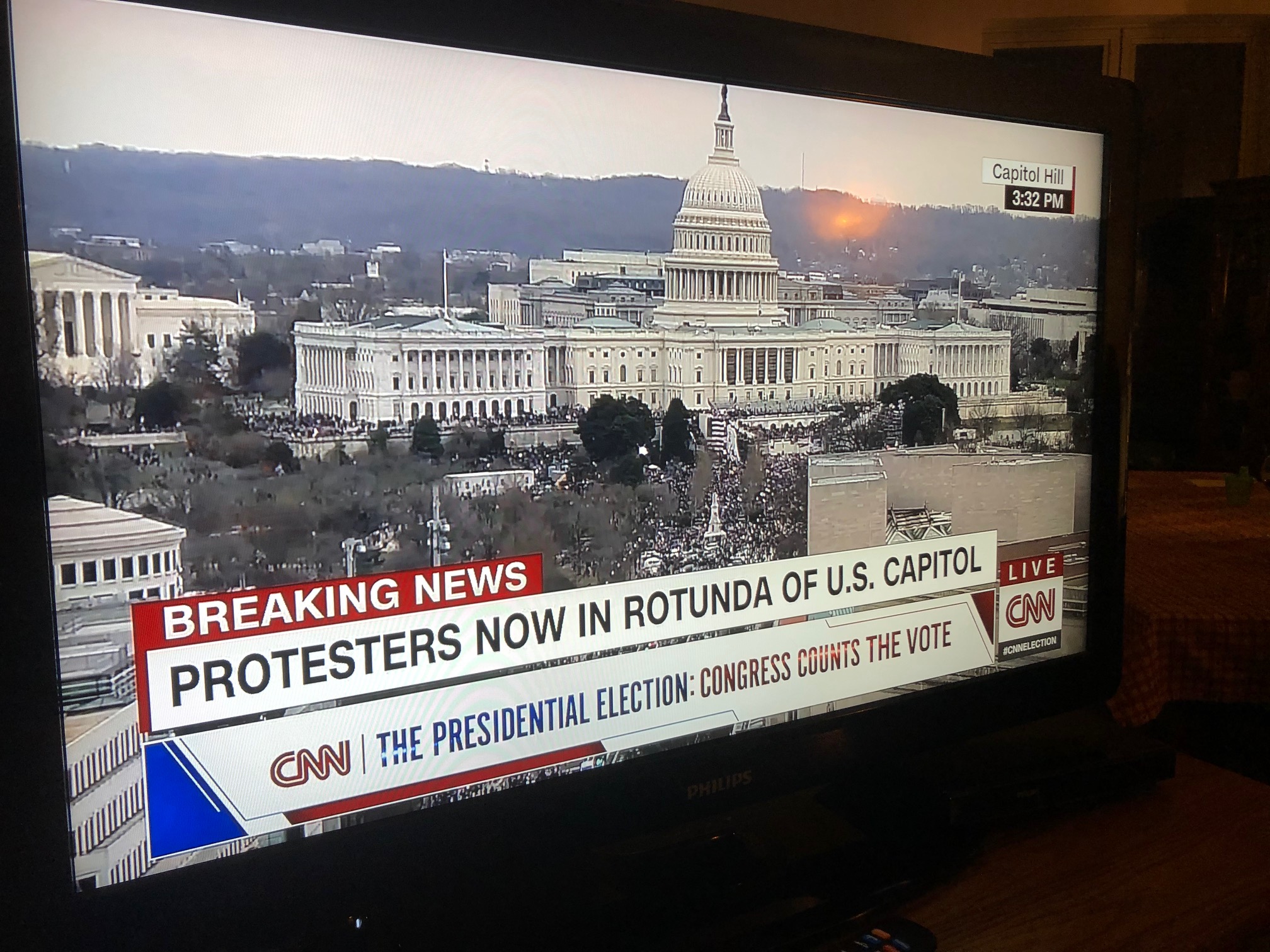 Note: The following post was edited and submitted to Belgian’s leading English newspaper, The Brussels Times. It was published on January 20th, 2021, the day of the Inauguration. See published version here

“Yes, today is the day that Congress will meet. And certify that Joe Biden will be President,” my colleague from the American Women’s Club concluded our ZOOM meeting mid-morning of January 6th, 2021.

“Absolutely, exciting day in America for sure,” I responded and wished her a good day.

It had been a typical Wednesday here in Belgium. My kids (as always on Wednesdays) were released from school at noon. We ate lunch at home, prepared their homework, and then dropped Holden off at Kung Fu. Brecht took a nap and Cosette and I read books in the car during Holden’s lesson.

After dinner, I took our dog, Schaduw, for a walk through our neighborhood. I huddled into the collar of my coat, protecting myself from the crisp, cool air. Streetlights cast yellow shafts of light onto glistening cobbles and art nouveau architecture. I love my neighborhood any time of day, but there’s a charm in the evenings when curtains are open, and chandeliers sparkle under intricately molded ceilings.  I passed one of the few offices in the neighborhood. Framed by wide windows, I saw two men sitting at a conference table. Beyond the table, a large television was tuned to CNN. The electoral college count flickered on the screen. I smiled to myself and thought, wouldn’t it be funny if they knew an American was walking by their office at this moment? Schaduw and I returned home, and we climbed the stairs to put the kids to bed.

Although it was 8:30 p.m., Brecht was fighting me. He’d had a long nap that afternoon and wasn’t tired. Holden was exhausted wanted to sleep. Cosette was reading in her room. I had read Brecht books, sung lullabies, smothered him in kisses, and wished him goodnight. I settled into the armchair in the boys’ room to watch the boys go to sleep (code: to keep Brecht from bothering Holden from falling asleep). And then. . . my phone started lighting up.

Screenshots of CNN “Trump Protesters Storm U.S. Capitol” scrolled through my WhatsApp groups. With Christmas lights glowing on the windows of my sons’ bedroom, my youngest jumping in and out of bed, and my middle child telling his brother to be quiet, I struggled to process this news. What the. . .

Without waiting for the boys to fall asleep, I exited the room and turned off the light in my daughter’s room. “Mama, will you please sing me a goodnight song?” she asked.

“No, no, honey. Not tonight. Mama needs to check on something real quick.”

I clambered down the forty-two stairs in our house while shout-whispering to my husband, “Vinny, something is wrong. Please. Quick. Turn on CNN.” He was working late and raised his head from his computer.

He stretched our cable cords and across the living room and CNN flickered into view. Together we watched in horror as the riots on the Capitol unfolded.

My phone continued to ping, and my mind raced to comprehend what I was seeing: swarms of protestors and violence. My initial reaction – to put my children to bed to shield them from the news (I quickly realized) was the wrong approach. With tears welling in my eyes I turned to my husband, “I’m going to get Cosette out of bed, so she knows what the children at school will be talking about tomorrow.”

I climbed the stairs once again and told her I needed her. Brecht, our not-sleepy-6-year-old climbed out of bed and followed us too. Together we watched the events at the Capitol and I tried to answer the questions being fielded to me from my children. But the answers sifted through my fingers like sand. Empty, hollow, and meaningless. “Honestly, Cosette,” I told her, “I don’t know what’s going on, but I just wanted to you be prepared.”

As part of their daily curriculum, my children along with their Belgian classmates, watch a television news program made for kids called  Karrewiet Over the past few months (and year) my daughter and her Belgian classmates have seen burning American flags in Iran, learned about America’s electoral college, and keep track of the election results. The storming of the U.S. Capitol? Yes. . . that would be on her news.

“Don’t worry, Mama,” she said glancing at the clock. “It’s so late now, I don’t think they’ll have time to update Karrewiet for tomorrow,” she said.

“Yes, but. . . it will be on there on Friday, for sure,” and with a heart heavy for many reasons, I ushered her and her brother off to bed one more time.

For the past four years, my family and I have lived in Belgium. We moved to Antwerp just months before President Trump took office. I have many American friends who lived in Belgium who have since returned home – they all echo the same sentiments – that the U.S. they returned to has become unrecognizable. On the European side of the ocean, our Belgian radio news have been speckled with reports, often snippets of Trump’s, Obama’s, and Joe Biden’s clear and untranslated voices amid a chorus of Flemish. The morning following the insurrection, I was cleaning the breakfast dishes while QMusic, our Belgian radio station, hummed from the corner of the kitchen. A string of Flemish rhetoric flanked Joe Biden’s words, “. . . the scenes of chaos at the Capitol do not represent who we are. What we are seeing is a small number of extremists dedicated to lawlessness. This is not dissent, it’s disorder. It borders on sedition, and it must end. Now.” I sank into a kitchen chair and wrapped my hands around my coffee mug. Thank god this is the message they are reiterating to the Belgians. This is not who we are. . .

Sitting in my Belgian kitchen, I reflected on all of my American expat friends. . . as we collectively watched the storming of the capitol with shock and disbelief. Perhaps our friends and family back home may not understand, but living across the world does not immune our hearts from the weight of what’s happening in America. Whether we’ve lived overseas for three months or thirty years, we will always be tethered to our homeland.

That afternoon, I greeted the kids outside the gates of their elementary school. As I embraced my daughter I asked, “Did anyone say anything to you today?”

I hugged her once more. My smile was weak when I thought of the Belgian kids confusing the White House and the Capitol. I wondered how many American children could identify the Netherlands vs. Belgium on a map.

I picked up a copy of the Gazet van Antwerpen, our local paper, on our way home. Despite the ongoing coronavirus pandemic in Belgium, or the new combative restrictions in the Netherlands and France, the first seven pages of the newspaper were dedicated to the United States Capitol riots – complete with the photo of the horned, shirtless “patriot” headlining every page.

Our country has a new horned mascot. Recognizable world-wide.

The next day I embraced my daughter from school. “How was it? Are you okay?” I asked her.

“Mama, it was. . . I don’t know. But they showed the riots on the T.V. and everyone started staring at me!!!” My heart sank. It’s not easy to be the American in the room. “But I told them! I said, ‘See!!! I told you!! They didn’t attack the White House. They attacked the Capitol!’” and her smile wavered.

“Good job, you’re right,” I nodded to her. But the gravity of the statement provided no comfort to either of us.

She continued, “The whole class cheered when they officially announced Joe Biden President though, so I guess that’s good!”

Days later, the world is following the coverage – the uncovering what happened at the Capitol. On our personal level, we watch news reports, talk to friends and family in the United States, and interpret Belgian news. Belgian schoolchildren are keeping up, too.

Tomorrow, Joe Biden and Kamala Harris will be inaugurated at noon, which is 6:00 p.m. our time. Another Wednesday, another Kung Fu lesson, another important American moment.  I hope, at the end of the day, we will all be cheering like Belgian school children – excited about the opportunity for a new beginning for America, and the world.