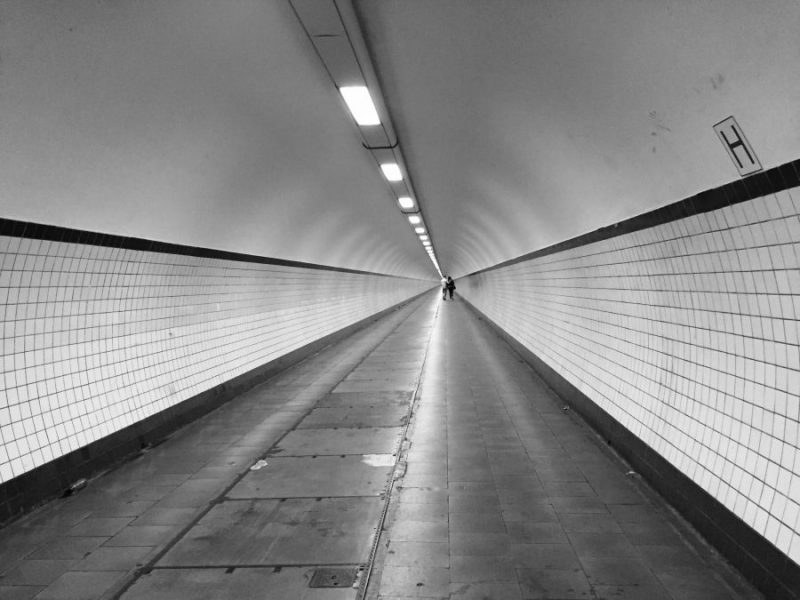 The wind whips through our hair as I gaze at the fearless below. A lone girl lounges back on her hands, one leg outstretched – a black boot dangling over the edge of the wall – undeterred by the fifty-foot drop to the glistening water below. A respectable distance away from the quiet one, a boy and girl laugh. Their legs tucked and arms wrapped around their knees and they rock back and forth on the stone pier. They sip from red cans of Jupiler beer between gazes at the water. The sunset casts glaring reflections on the muddy water. The Scheldt River is big. It’s wide. It’s like the Mississippi River and just as strong and significant, but not as warm, I’d guess. The opposite bank isn’t much to look at, but as I stare across I remember there’s a hidden gem below the surface.

“The pedestrian tunnel – do you think we can find it?” I ask my husband.

“Sure, yeah – I think we’re close, let me check my phone,” he responds. I tuck my windblown hair behind my ear as we gaze at his phone. “Yeah, it’s just right here,” he says and takes my hand and starts guiding me towards the Vridagmarkt.

I’ve heard about this mysterious tunnel – my American Women’s Club friends have talked about it, I’ve seen photos in guidebooks, two of my friends who live in the Netherlands have been there. For an Antwerp resident, I feel like this is a rite of passage I need to explore, but I am clueless as to where it begins.

We walk to the Vridagmarkt – a small square speckled with trees and surrounded by shops and restaurants. A tall yellow-bricked building stands at the head of the square. We walk towards it, look for a sign. My husband double checks his phone.

He nods and wrinkles his eyebrows. We’ve been to the Vridagmarkt countless times – on Sundays there’s a cute bric-a-brac market where we’ve bought antique wine glasses, beer glasses, framed art, and my new favorite lamp.

“This is the beginning of the tunnel, huh? It has been here the whole time – who knew?” and we laugh as we punch the button.

Bicyclers wait – bored and impatient for the cargo-sized elevator. The doors open and we all step in – the cyclers hopping into the cavernous space. My husband and I grasp hands and look at each other like kids – the unknown about to become known. The numbers tick away, lower and lower into the ground we go. The lift stops and the doors gape to reveal a stretching tunnel, the end invisible to our eyes. The commuters hop back onto their bikes and pedal away.  We step into the white space, gazing into the distance, but then our eyes are caught by the antique wooden escalators behind us. Famous throughout the city and in our living room – they adorn the cover of our 500 Secrets of Antwerp Guidebook. They cascade from the ceiling, like a vintage wooden waterfall. At the time the tunnel was built, the escalators were one of a kind.

After the First World War, the city of Antwerp expanded over the Scheldt River. The tunnel was opened in 1933 after nearly sixty years of debate on how to link the left and right banks of the city. The idea of a bridge was abandoned in favor of a tunnel because of the problems a bridge would cause for the shipping industry. In 1931, the plans for the tunnel were created and the final project was inaugurated on September 10, 1933. After the defeat of Germany during World War II, German soldiers heavily damaged the tunnel during the German retreat in 1944. The tunnel was repaired and reopened in 1949.

My husband and I walked through the tunnel, 572 meters (about 3/10 of a mile). (Note: If you plan to tack this onto a date night, better skip the heels. Lesson learned). Bikes zoomed past us, only for us to catch up with them at the opposite end, awaiting the elevator. (The escalators were not in service during our visit, from what I’ve heard, they’re regularly closed for maintenance). Again, we piled into the elevator to be whipped up to ground level. Two bicyclers giggled and kissed before departing. I squeezed V’s hand and we stepped into the summer evening.

The tunnel’s matching bookend on the opposite shore stood proudly – shrugging off restaurants and shops, standing unhampered and center stage in a large park. We turned towards the river, walked to the levy and climbed the steps. From the opposite bank, we were greeted by the most beautiful view of the city.

After exploring the park, we returned to the city via the the tunnel (the Van Eeden metro station is across the street. The number 3, 5, 9, & 15 trams will whip you into Groenplaats in a fraction of the time it takes to walk, if that’s where you’re headed anyway. Another Lesson Learned.)

We sat down in the Grote Markt for a well-deserved cocktail after our hike and the hubs and I smiled – pleased with our discovery of the historic hidden jewel in the heart of the city. The experience, and view is highly recommended.