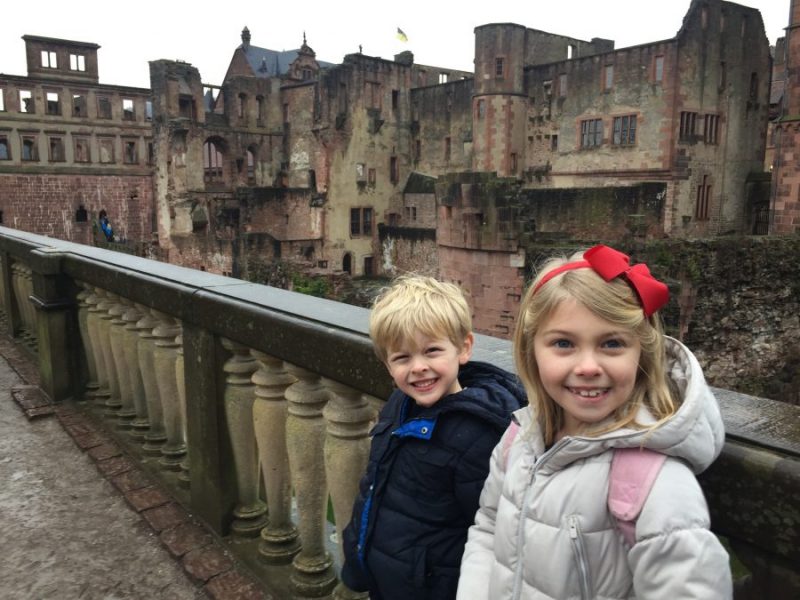 A flight over the ocean. An embrace by a colleague. A walk through the FRA terminal. A drive on a bus. A crumbling castle atop a hill. A flute player. A toss of a few coins. A view. A photo. A memory.

The year was 2007. I was an American Airlines internal auditor. My job was to fly around the world, visit the different airports the airline operated in, and audit them. It was a very cool gig. Especially for an accountant. The team was small – we had five staff/senior auditors and a manager. I remember the first time I met Carrie – she wore bright turquoise pants and a flowy blouse. She was tall with big features – from her hips to her forehead – her body and attitude demanded attention. “I’m on my second marriage now,” she slapped her slender thigh at that work lunch, “. . . and if this one doesn’t work out, hell – I might just switch to women,” she threw her arms in the air and shook with laughter – her wide smile gleaming like a toothpaste commercial – and without prompting, the rest of the table followed suit. I fell in love. Like the nerdy new girl at school, I wanted her to be my friend. Like. Really bad.

Well, maybe it was fate, but she kinda liked me too. Especially after we’d been to Nicaragua, Costa Rica, Washington D.C., and Brazil together. We’d drank beers watching volcanos erupt, I warned her against hang gliding in Rio, and we’d tromped through forests together. We’d become best buds and favorite travel companions. In a boring but tipsy Nicaraguan hotel I asked her to be a bridesmaid in my wedding. She accepted with glee. Now it was the much sought-after FRA-ZRH audit. Frankfurt-Zurich. American Airlines had just a few European airports they flew to directly and these were coveted. Semi-annually we’d sit in a dim-lit conference room in the American Airlines HQ (they’d taken out half the light bulbs to save money after 9-11). And the five of us and pull sticks from Carrie’s Chinese Fortune canister – numbered 1 through 5. On the white board on the wall were promises of adventure, exoticness, and escape – the locations to be audited within the next six months. Whoever drew number one picked from the list first. One, two, three, four, five, then five, four, three, two, one. Each international location required at least two auditors and domestic were usually solo gigs, unless it was a hub.

“We’re going to Heidelberg today!” she said after I departed my plane in Frankfort. I don’t know what time it is, much less where and what Heidelberg is. I just want to shower. And sleep. “Oh no you don’t!” she says. “The best way to get through jet lag is to power-through!” she said between sips of Europe’s largest cup of coffee. She’d been there a few days. With her mother.

“Fine. Fine. Heidelbranch sounds great,” I mumble. “Please, I need to get this plane funk off of me. Let me shower and I’ll be good as new.”

She gleams that Hollywood smile. “It’s Heidelberg. Perfect – let’s do it,” she winks and leans close to my ear. “Besides, Mom will be so happy to see you,” and her eyes convey the message. Isn’t everyone’s mom just a little bit easier with a friend in tow? And aren’t your friends’ moms so much easier handle than your own? “Of course – I can’t wait to see her,” I wink back.

Carrie had the habit of never exploring the city we were actually auditing. We always had to GO somewhere. After a luxurious bus ride an hour later (no seriously, it was quite nice), I awoke from a cat nap and we were deposited in the cute little German city of Heidelberg.

I shielded my eyes from the sun and stepped into the perfect air. The cobbles stretched before us, sunlight bouncing from gable to gable, and the crush of tourists ascended the road. I peered up – the large crumbling castle sat stoic atop a small mountain, overseeing all who moved below with superior indifference. With Carrie and her mother, we traversed the streets. A song flitted through the air and whispered kisses on my ear. A young flute player with braided hair stood amongst the architecture. Her music reverberated off the buildings and I was mesmerized. I grew up playing the flute – but in this moment, at this place – it was the most beautiful sound I’d ever heard. I dug into my purse and so moved by the moment, I threw coins into her open flute case on the ground. She nodded a thank you without pausing the beautiful cadence.

Carrie stopped and watched me. As we walked towards the castle she articulated her observation. “You’ve always been susceptible to the energy around you,” she whispered.

My jet-lagged mind processed her words. “I guess so,” my eyebrows furrowing. “Europe is just so beautiful. It has the most beautiful energy,” and I smiled.

“Well, Heidelberg, Germany is our first stop,” he announces, and my heart swells with memory.

We arrive with great fanfare, like only a family of five can do, and explore the city the next day. The kids spot a child-sized train at the Christmas market and we indulge them. The same castle sits atop the hill overlooking the ancient city and as I eye my seven, six, and three-year-old round the Christmas trees and wave excitedly towards my husband, I realize – that despite the total beat down that traveling with three kids can be (See Adventures of a Three Year old blog post earlier this week), that these days are numbered. My daughter waves – her smile as warm as sunshine – with just as much happiness as the three-year-old. My middle child sits like the caboose, sporting his batman mask and I laugh. My eyes gaze up to the castle, which we will explore later that day in the cold and sleet – but for now, I’m thinking of those moments with Carrie years ago and these moments right now. Her words couldn’t have rung more true – I’m am still susceptible to the energy around me and again, the city almost moves me to tears. The kids exit the train and I embrace each one of them, never wanting to let go. The energy of Europe hasn’t changed a bit – and the views have only become more beautiful with the passage of time.