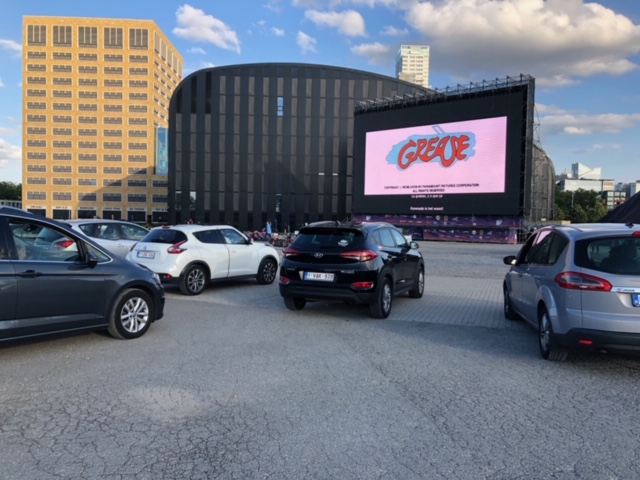 “I loved, loved, loved that movie. I mean, really. I was border-line obsessed. I’d watch it and then rewind it. And I’d play it again and again. Perhaps even four or five times in a row!”

The sunlight is streaming through the panes of glass, golden rays darting between our organic ginger and mint teas. The last gasps of a beautiful Belgian summer are holding strong on this Tuesday morning. My friend continues, “I mean, Sandy. . . I thought she was just so beautiful,  so virginal with her beautiful blonde flipped hair. . . Sitting on the pavement at Thunder Road. . . And then was it Rizzo who came up to her?”

“Oh no, it was Frenchy,” I reminded her.

“Oh yes, Frenchy! And then Sandy asks Frenchy to help her,” my friend looks up towards the coffee shop menu hanging above my head. But it’s not the menu she’s looking at, I know. Subconscious or not, it’s both her imitation of Sandy gazing at Danny Zucko from afar but also remembering her own wistful childhood memories. After an inhale and a sigh, her eyes snap back to me.

“And then! And then! She emerges with those black clothes off the shoulder and those pants!”

“I heard she had to be sewed into them!” our friend opposite the table adds in.

“Oh yes, I heard that too,” she nods a confirmation.

“Isn’t that just it, though – it’s a bit like the iconic American movie – the poodle skirts and the diner with the milkshakes and cheeseburgers. . .” And I’m kind of snapped back into reality. Sometimes, as an American expat (and just like some Belgians commonly mistake us as well) I’m fooled into thinking there are two sets of people: Flemish speakers and English speakers. And in the middle of this English conversation, we’re all sharing memories of this movie we were all obsessed with to be fair, for I too, would rewind and rewind my Beta (yes – Beta-taped-from-the-t.v.-copy) of Grease, and I realize. . . that my friends grew up watching it from the U.K.! I mean, I always wanted to live in the 1950s – wearing poodle skirts to school, be on American Bandstand, and go to a drive-in. I was jealous of my Aunt who grew up in that era. It had never occurred to me that my dream was untouchable by a few decades, as opposed to time and an ocean.

I always knew Grease was a favorite movie among my American friends growing up – I mean, who didn’t want to be a Pink Lady? But it wasn’t until I was in a wedding in South Africa – seemingly the furthest, opposite point on the globe from Dallas, Texas – that I realized that Grease was a WORLDWIDE phenomenon. I was an attendee at a wedding for a friend of a friend when this epiphany occurred. I had met Cecile working at BDO in Dallas. When she asked me if I’d like to take a trip with her to visit her home and family in South Africa, I had jumped at the opportunity. The wedding was for her best friend. After traversing the globe, and meeting Cecile’s family,  I had been mesmerized by the rolling vineyards stretching outside of CapeTown.  At a wedding on the opposite side of the globe from home, I basked in the glow of the stone winery floors. The soaring arches surrounding the room framed the reception tables where each golden tablecloth was specked with tea lights and red hearts. We dined on lamb and sipped wine from the Stellenboch vineyards.  Outside the reception hall, the rows of grape leaves stretched towards the mountains. I was feeling awkward about being the only person in the room who didn’t understand the language floating around me (little did I know this would someday become a daily occurrence in my life). I’d never heard of Afrikaans before I met Cecile, much less spoke a word of it. It wasn’t until the dinner concluded and the DJ started spinning that the language barrier disintegrated.

In the middle of a dance floor with a hundred people all new to me, Sandy’s voice rang through the air. “Summer Days drifting away. . . those Summer Nights whoa whoa whoa!” and we all joined in the chorus. In that moment, I realized. Grease. Is loved. Everywhere. It links decades, cultures, and geographies unlike anything else on earth.

So. You can imagine my total and complete excitement, in the year 2020, with so many broken hopes, holidays, and celebrations,  that I was able to fulfill a childhood dream.

Movie Drive is a drive-in theater in Brussels, Belgium and I saw a Facebook ad touting the opening. The ad explained that it was a perfect venue for movie-watching during the Coronavirus. The audio of the movie is broadcast through a radio channel. Food trucks and drinks were on-site to provide refreshments. And it would cost our family 25 euros for the evening. I scanned the listings and I saw the Grease was playing on a Saturday night in September. I was sold.

We bought and printed our tickets online. On Saturday evening, we brought pajamas for the kids and threw some concessions in the car for good measure. Once we arrived in Brussels, we pulled into the sprawling open parking lot and gawked at the screen in front of us. “Europe’s largest screen!” the ad had said. I believed it. The orange-vested men directed us towards a staggered parking spot to give us a clear view of the previews.

“Alright, we’re here!” my husband threw the car into park. The sun cast a warm glow as it descended into the earth. An excitement rang through the beautiful fall evening. 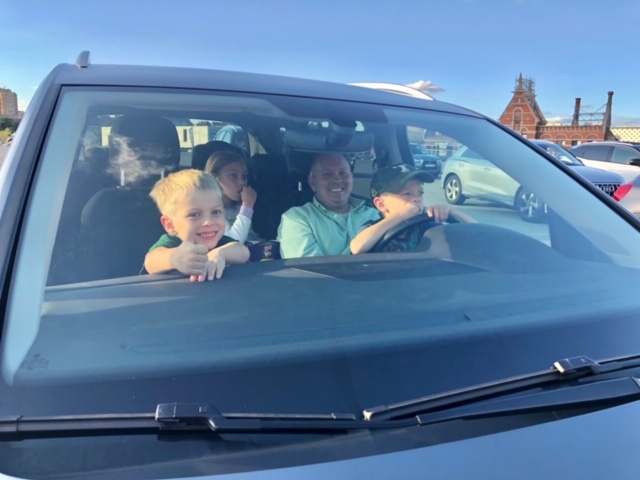 “Why don’t you go get us some popcorn?” I asked my husband. He took Holden and headed towards the food trucks.

Meanwhile, the 5-year-old awoke from his nap in the car. “Where are we?” he asked.

“Do you see that? That’s where the movie is going to show” and he climbed into my lap in the front passenger’s seat. 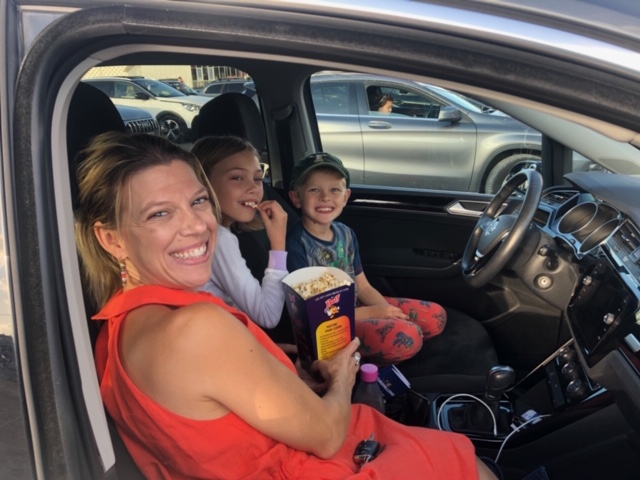 Vinny returned with some burnt popcorn. Popcorn is not a Belgian specialty. “They’re selling beers though,” he remarked.

At 6:30 the movie began and my heart swelled at the sight of Sandy, Danny, and at the sound of the opening theme song. I couldn’t believe it. I was seeing Grease! At a drive-in theater! In Brussels! All of my childhood longings were coming true. And the best part was? That my kids loved the movie, too.

Inside each car, everyone sang and danced to Grease Lightning. We all smiled at each other through our windshields. Again, in a time when social distancing is the rule, hearts and smiles are connected through culture, through memories, and through glass.

The kids’ eyes grew wide with amazement as they watched the cars line up during the drive-in scene. “Mama! Mama look! They’re at a drive-in, too!” they shouted.

We all cheered when Danny won the race against the Scorpions. The kids disbelieved that it was really the same actress that played Sandy in those tight black pants and curly hair. We all exited the car (the kids in their pjs) and danced to “You’re the one that I Want!” in the parking lot.

At the end of the movie, everyone honked their horns in appreciation as we exited the venue. I told my husband, “I’ve been very blessed to see some pretty awesome things in my life. . . But seeing Grease at a Drive-in theater with my newly-converted Grease-loving kids has got to be the top 5 coolest things ever.” There’s a win for 2020.

As we weaved the car back onto the E19 headed towards Antwerp, I thought the kids would fall asleep in the car. They had no such intentions. “Mama! Play that song again. . .” And I found the soundtrack on Spotify for the drive home. We relived the entire movie over again, all of us singing along.

The more I travel, the more places I live, the more I realize there are many things that bind us together – no matter what country, background, or language. And to the T-Birds and Pink Ladies, I can say, no matter how far or how old I am, I will always be – like so many other people around the world – Hopelessly Devoted to You.