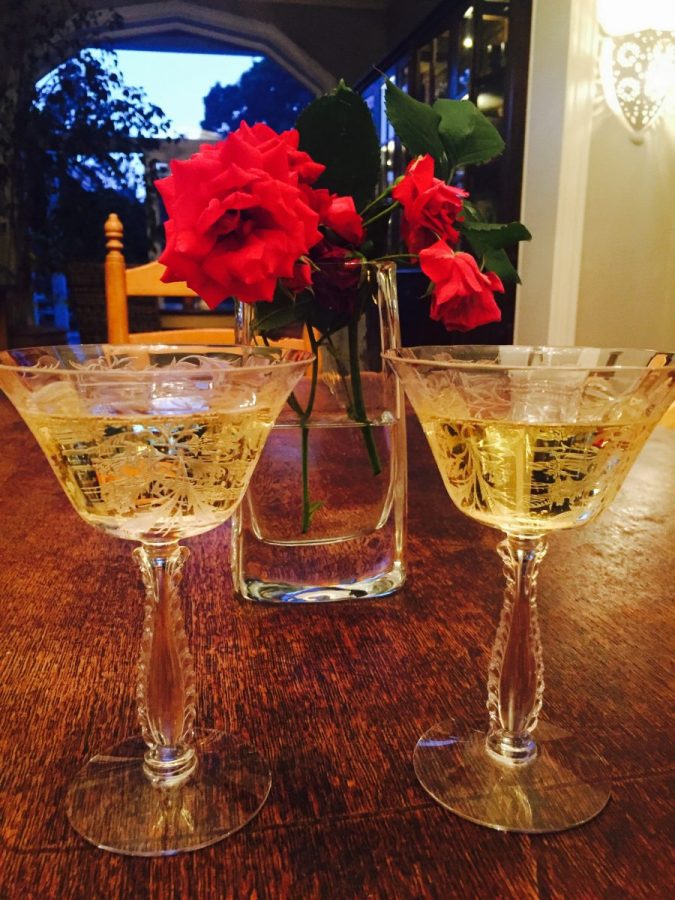 Thin and fragile, etched in white with a pattern of tiny edges running up and down the stem of the glass, I hold my Grandmother’s crystal in my hands.

“They’re absolutely beautiful,” I tell my Grandma, “What did you say the pattern was?”

“It was called Heather, by Fostoria,” she drawls into the phone, her West Texas accent is thick.

“Fostoria,” I repeat, the word like air on my tongue.

“Uh, huh, that’s right. I picked out the pattern – and my Mother or family would give me a plate or a champagne glass for Christmas or Mother’s Day. All those pieces were collected over a long period of time,” Grandma tells me. “The red glasses were fun, but clear crystal was highly sought after for dinner parties.”

I picture her Mad Men style, with an apron around her waist on top a full skirt. Her hair perfect and her lips lined in red lipstick, serving a home cooked meal to guests.

“Where did you buy crystal in Lubbock?” I inquire.

“Oh, well – the only place you could buy crystal. Anderson’s!” she continues, “The were respected for years. They were the most expensive and well-known jewelry store in West Texas,” my pen flies across the page. “Just like I went to market for clothes, they’d go to market for crystal, diamonds, china, and jewelry. They passed the business on to their children, until there was just no one left. They’re out of business now,” and I think of how sad that would be. The fancy Mad Men jewelry store – all those women and men in pill box hats and suits gazing over polished counters – gone, like the style, class, and era it represented.

But as I booted up my computer to write this post, I got to thinking. Or rather, researching. Hoping to prove my Grandmother wrong and bring her good news. I found just the jewels I was looking for with the help of two sources: An article published by the Lubbock Avalanche-Journal in 1998 and excerpts from Historic Lubbock County: An Illustrated history.

Anderson Bros. jewelry store lives on in Lubbock, Texas, although the Anderson family is no longer involved. It was purchased in 1990 by Wendell Holder, who had been involved in the family business since 1976. In 2005 Wendell Holder passed ownership over to Ann and Travis Winegar and Tood and Zoellen Fields – also long term members of the staff.

Curious about the beginnings of this famous West Texas jewelry store, I further researched and discovered the business began in 1923 by J.C. “Doc” Anderson (Isn’t that just the name you’d expect to bring class to a dusty West Texas town? Perfect). Previous to starting his own business, he’d spent a year learning the watch-making business in St. Louis, worked as a repairman in New Mexico, Lamesa, and Ft. Worth then headed to Lubbock with hopes of opening his own store. Rumors dusted the plains that Lubbock would be selected for the site of a new university. Soon after his move, he heard fire alarms going off across the city and stood on the roof of his home. Lubbock was to be the new site of Texas Tech University – home of the matadors (at the time, anyway). Ready to launch his company, he ran a two-page ad in Lubbock’s Avalanche. His first showcases were in the lobby of the Citizen’s National Bank in downtown Lubbock.

Starting in 1957 and for 30 years following, Anderson’s jeweled and wrapped gifts for the citizens of Lubbock and beyond from their store on 13th Street and Avenue J. In 1972, Anderson’s opened up their location in the South Plains Mall as well.

Today, Anderson Bros. operates out of a location in Kingsgate Center on Quaker Avenue.

I’m excited to tell my Grandmother that the source of her crystal is still in business. On a side note, my Great Aunt Sis attended and graduated from Texas Tech before they changed the official mascot to the Red Raiders in 1936. Her class ring is engraved with the matador and has a red stone in the middle. Perhaps she too, bought her ring from Anderson Bros.?

The article in the history books concludes, “What we sell over time may change, but how we sell it will not,” Wendell Holder. It’s still a family owned company, with a history as long as the jewelry, crystal, and china they’ve sold over the years. As I hold my Grandma’s crystal in my hand, I can still feel the excitement it must have brought her when she first opened the box. From the fanciest jewelry store in West Texas to an art deco home in Belgium – these little beauties definitely put the Belle in Belgium.