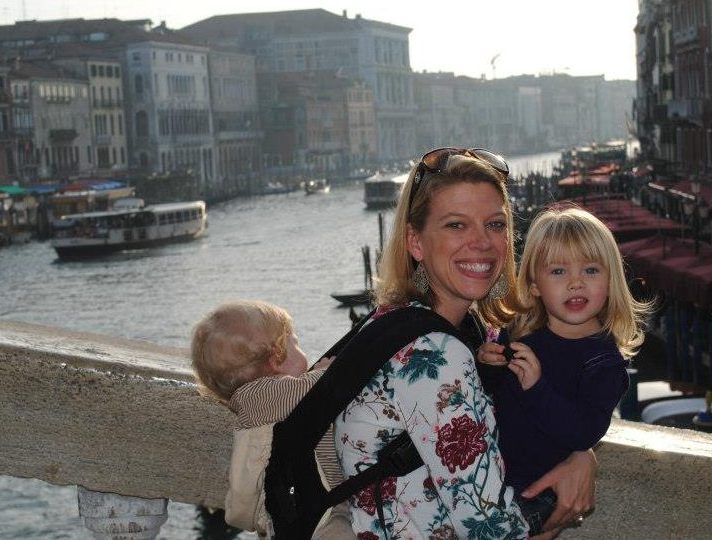 I walk to my friend’s house with a pot of bright pink flowers in my hands. I press the doorbell. Her shadow steps over a baby on the floor, points to her daughter on the couch, and approaches the door. She smiles. But not really. I give her a fierce hug and hold the flowers out to her. “I thought you could use these,” and tears brim in her eyes.

“Is it that obvious?” she asks.

“Um, yeah,” and my eyes water – her weepiness is contagious.

She’s the second friend I’ve talked to in a week that just returned from a ‘holiday’. Both had one-year-olds. Both looked like every muscle in their back was tense and they felt like disappearing. Both looked like they felt alone, like there was something wrong with them, and that nothing was going as planned or hoped. In one hug, I understood they felt defeated, tired, and anxious. I recognized it all.

Claire, the mom-of-three character from Modern Family said it best. “Traveling with children isn’t a vacation, it’s a business trip.” Her goofy husband tried to convince her otherwise – But we’re in Hawaii, loosen up Claire!, etc. AND they weren’t toting around a toddler.

After we moved to the Netherlands in January 2012 my husband and I took small road trips with our baby and toddler. I remember our first trip to Brugge that summer. We were in the most adorable Airbnb with this gorgeous spread for breakfast provided by our hostess. Sunshine shimmered off the canals, the song of horse and carriage echoed through the town, and the patios were alive with happy conversation and the rich scent of Belgian beers. My husband was excited – ready to explore, do, see! I. Um. Wasn’t.

“You know honey, I think I’m just going to stay here and take a nap with Cosette,” I told him. I don’t remember specifics, but I’m sure it had been a hell of a week keeping up with my two-year-old and 8-month old. (As any day, week, month. . . would have been) My husband looked at me like I had lost my mind.

“What do you mean, take a nap?” and I shrugged a response, “But we’re in Brugge!” he continued. “We have to go and sit on a patio in the sun! Have a Belgian beer! It’s what you do when you’re on vacation!” I shook my head. I’m sure I gave him a small lecture on caring for two kids and how I was exhausted and how I’d sleep-trained my 2-year old and I was going to reap the benefits. You go. Have fun. Take the baby.

Well, he went. Him and 9-month-old-Holden toasted to the Belgian summer with a bottle of beer and a bottle of milk, respectively. I cuddled with my daughter under the rafters of a 300-year-old house. It worked.

Did I feel a far cry from the woman he married? The woman who had swam through caves in Belize with a flashlight on my head, went to Flamenco shows with him in Argentina, and fed baby tigers in Thailand? You know I did. He was right. I wasn’t myself. And did I feel exhausted? Yes, I did. So now I’m lame and exhausted. Which is defeating and an awesome combination for the self-esteem, too.

Months later, my husband booked us a Mediterranean cruise – one week after Holden turned one-year old – the minimum requirement for the nursery. I know. I know. This should have been the trip of a lifetime. And it was. It really was – Venice, Bari, Mykonos, Athens – it was beautiful and enchanting and amazing. The photos we took were incredible – we hiked up to the Parthenon with a baby strapped to me, dined on Greek food with stray cats around our feet, and gazed over crystal blue waters.

What you didn’t see – were the break-downs. And there were many.  You didn’t see the two cribs tucked into our cabin and my husband and I taking turns putting them back in bed while we hid on the balcony. You didn’t see me chasing them through the elegant dining room in a strapless dress because an hour (or two) is just way to long for a toddler to sit. You didn’t see me crying to my husband after late nights, early mornings, and days of interrupted sleep – Why? Why do we even try? Try to travel with a baby and toddler?? Why?

Our family of four caught the attention of other travelers. As we walked back to our cabin one night, completely defeated and on the verge of tears – an American woman stopped us. “You know, you’re really doing great,” and the tears threatened to overflow. I shook my head. “No really, she continued. You guys live overseas?” somehow she just knew. . . no American couple with two babies would fly across the ocean and try to do what we were doing.

”Yes, we’ve lived in the Netherlands for about ten months,” I confessed, my lips twisting. And she nodded. Wise. Knowing.

“My family and I lived overseas too when my boys were young. It was hard, very hard – but what you’re doing, is teaching your kids to be travelers. Now? My boys are pros at it. They know exactly what to do.”

“I hope so,” I mumbled. Disbelieving, but thankful for the encouragement. “Thank you.” I returned to our cabin and wrestled to put my kids to bed for another hour or so.

I recently ran across an analysis of William James, the psychologist and pioneer from the late 1800s. Known as the Father of Pragmatism, Dr. James believed that personal happiness hinges on being practical – if your reality lives up to your expectations, you’re happy. If it doesn’t, you’re depressed.

Makes sense. My two friends I attempted to comfort are both confident, beautiful, and educated women. They’re both well-traveled, had full-time careers before they had children, and have good relationships with their spouses. Just like me. All of us think we should have a great time on holiday. Think we should have everything under control. Think that we shouldn’t let a little thing like a baby defeat us. We’re better than this! Weakness is not an option! Isn’t this what society has told us all along? Women can do anything? So, when there’s a baby jumping on our bed a 9:00 p.m. (two-hours past his bedtime) or our toddler is screaming for milk in a restaurant that just doesn’t have any, or your child wriggling out of his stroller but refuses to hold your hand in a busy city – then we feel defeated.

The reality. . . is that our expectations – of ourselves, of our children, are too high. We want the kids that go to bed, the kids that don’t scream in restaurants, the kids that sit in their strollers. But in reality – those are dreams, not requirements for a fabulous vacation.

Those kodak moments are worth something. The ones you show to the Facebook world. You may roll your eyes at your ‘manicured’ social-media life – but still. They did occur. You brought your kids to the Eiffel tower, you took them to the beach, and you wrestled them in front of that fountain. Sure, the soundtrack may have been some screaming and crying – but don’t discount the fact that you’re trying to do something many parents just won’t even try to do. And that’s worth a pat on the back, at least.

Today, August 19, 2018, I am sitting in Rome and our second cruise on the Mediterranean departs in three days. I now have an 8-year-old, a 6-year-old, and a 3-year old. “What do you want to do when you go to Rome?” my husband asks.

“I’d like to eat some good food, walk around, and see some stuff,” I told him. And that’s what our family can handle.

Last night during dinner – my 8 and 6-year-old were pretty awesome – busting out their magazines and coloring books – “restaurant-worthy” as a friend from Texas would say. The three-year old? Well, he insisted on running up and down the booth that stretched the wall of the restaurant – hurdling his backpack and my purse in his wake.

As we wrestled him back into his seat an American woman passed by. Those American women. Always giving encouragement and advice – ha. She nodded to our family, “You know, someday you’ll miss these days,” and my husband and I laugh. “They grow up and then they’re gone, and you’ll wonder what happened,” and I suppose she’s right. We told her we still had a while to go, but at the same time – I eye by two oldest – those two who made me crazy and wonder why do I even try a few years ago.  They’re sitting at the table, using a knife and fork – I realized that she might be right. And then I tackled my 3-year-old before he raced across the restaurant.