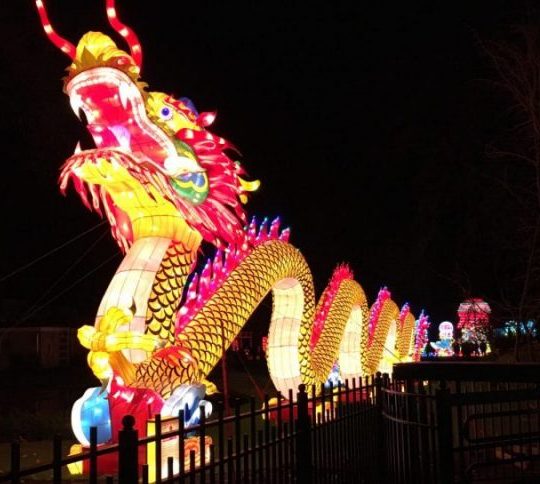 The first week my 5-year old son was enrolled in Belgian school, he went on a field trip to the Antwerp Zoo. “But Mama, we didn’t take the tram, we took a school bus,” he jumped around like a kangaroo when I picked him up from school that day. He loved the zoo – the animals, the playground, the bus ride. A few months later, as he blew out his candles for his birthday, he wished the whole family could go to the Antwerp Zoo. On a chilly day in December, Sinterklaas rang our doorbell and scurried away on Amerigo before the kids could see him. The kids brought the packages inside and opened an envelope. They discovered he had delivered our family tickets to the China Lights at the Zoo for Pakjesavond (cue three jumping kangaroos in the living room). A few days later we boarded the tram (sorry bud, no bus this time) and headed into the city.

The Antwerp Zoo was established in 1843. It’s the oldest animal park in the country and one of the oldest in the world. It’s just steps from Centraal Station, which is wildly convenient, especially with kids. We stepped out of the train station and were greeted by glowing Dragons in the plaza outside. In 2014 & 2016, the Zoo hosted the China Lights festival and more than 100,000 visitors enjoyed the display. A large sign outside the zoo boasts the return of the festival beginning December 1 until January 14.

The Festival was absolutely gorgeous and each display was accompanied by signs in both English and Chinese. The kids loved it and we were able to take sneak peeks of a few of the zoo animals at night (the penguins seemed to party in the glow of the dragon lights). The display ranged from traditional Chinese sculptures such as swans, lanterns, and nightingales to displays adapted for the zoo – water spouting elephants, colonies of penguins, and flamingos (nestled appropriately along the FlamingoPlein).

Pearl of Wisdom: The Antwerp Zoo daily ticket prices are quite pricy (19 Euros for children 3-11, 22 Euros for children 12-17, and 24 Euros for adults). If you have a family, and are planning on going more than once, the Family Membership is the more economical option (189 Euros). With a membership, you’ll have unlimited access to not only the Antwerp Zoo, but its sister Planckendael also for one year.